The President of Kazakhstan arrived in Russia at the invitation of Russian President Vladimir Putin.

President of Kazakhstan Kassym-Jomart Tokayev, who is in Moscow on his first foreign visit after his re-election, laid a wreath at the Grave of the Unknown Soldier near the Kremlin walls.

The Kazakh head of state arrived in Russia on Sunday at the invitation of Russian President Vladimir Putin. On Monday, the presidents will address the participants of the XVIII Forum of Interregional Cooperation between Russia and Kazakhstan, which is taking place in Orenburg, via video link from the Kremlin.

Then Vladimir Putin and Kassym-Jomart Tokayev will hold talks, following which documents are expected to be signed, including a declaration between the Russian Federation and Kazakhstan on the occasion of the 30th anniversary of the establishment of diplomatic relations.

Early presidential elections were held in Kazakhstan on November 20. Tokayev, who has held the country's main post since mid-2019, won with 81.31% of the vote. He took office on November 26. Tokayev's term of office will be seven years, after which he will no longer be able to be elected to the post of head of state.

In his speech at the inauguration ceremony Kassym-Jomart Tokayev stressed that Astana will continue to implement a balanced and constructive foreign policy aimed at protecting national interests. Priority attention will be given to issues of mutually beneficial cooperation and strategic partnership with neighboring states — Russia, China, Central Asian countries and partners in integration associations. In addition, he assured that the authorities of the republic will make every effort to develop multifaceted cooperation with the United States, the EU, the states of Asia, the Middle East and Transcaucasia, as well as with all interested countries.
Russia Kazakhstan Moscow Kremlin President Kassym-Jomart Tokayev Grave of the Unknown Soldier TASS
|
Facebook
|
Twitter
|
VKontakte
|
Odnoklassniki

Special representatives of Armenia and Turkey met in Moscow

Kim Jong-un will arrive or arrive at the Vietnamese summit

Russian "Commander" will take part in the coast guard forum

Russia may soften the visa regime with Turkey 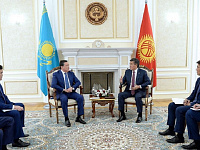 Raul Khadzhimba nominated as a candidate for the presidency of Abkhazia

UAE Foreign Minister: Normalization of relations between the Emirates and Israel will change the situation in the Middle East region