President of Kazakhstan Kassym-Jomart Tokayev held talks with the head of the European Commission Ursula von der Leyen on Tuesday on the sidelines of the 77th session of the UN General Assembly and invited her to make an official visit to the republic. This was reported by the press service of the country's leader.

"The parties discussed the prospects for the development of an expanded strategic partnership between Kazakhstan and the European Union. Particular attention was paid to the implementation of the agreements reached following the official visit of the President of Kazakhstan to Brussels in November 2021. In particular, the issues of the implementation of joint projects in the energy and transport and logistics industries were touched upon," the message reads.

Tokayev and von der Leyen also confirmed their mutual commitment to further comprehensive strengthening of the strategic partnership. In turn, the head of the European Commission highly appreciated the large-scale reforms implemented in the country under the leadership of the President of Kazakhstan.

"At the end of the meeting, Kassym-Jomart Tokayev invited Ursula von der Leyen to make an official visit to Kazakhstan," the press service noted

Russia is ready to cancel visas for Turkish entrepreneurs 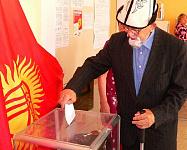 Inspection from the other side: Taro Kono surveyed the "northern territories" of Japan from Cape Nosappu

Advanced models of Russian military equipment were shown at the parade

The fifteenth ECO summit was held in Ashgabat on Sunday