Benjamin Netanyahu intends to visit the UAE for a three-hour visit next week.

Israeli Prime Minister Benjamin Netanyahu announced on Tuesday that he plans to make a three-hour visit to the United Arab Emirates next week and possibly also visit Bahrain. This was reported by The Times of Israel, noting that this trip of the Prime Minister has been planned for several months and has been postponed several times.

“We [with the UAE authorities] have a lot to discuss, [this visit to Abu Dhabi] is very important from a  security point of view, and also on  national and  international levels, , quotes the prime minister's statement. Benjamin Netanyahu added that due to the restrictions imposed in order to combat the pandemic, the duration of the visit "was reduced from three days to three hours." The head of the Israeli Cabinet noted that this was done "at his request."

On September 15, 2020, in Washington, the Israeli side, with the active mediation of the United States, signed documents on the normalization of relations with the United Arab Emirates and Bahrain. The tripartite deal was dubbed in the West the "Abraham Accords" in honor of the prophet, considered the spiritual ancestor of all followers of Islam, Judaism and Christianity.

Before concluding peace with UAE and Bahrain, the Jewish state from  diplomatic relations only with Egypt and Jordan. 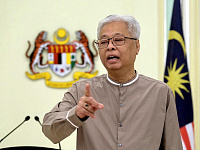 Malaysia and Vietnam do not support sanctions against Russia

Elections to the State Duma are held in Russia

The President of the Russian Federation phoned the leader of Armenia

First session of parliament opens in Malaysia after a long break