The foreign ministers of Kazakhstan and Iran discussed measures to stabilize the situation after the unrest.

“During the conversation, the Iranian minister, on behalf of the leadership and people of Iran, expressed condolences for the those who died during the unrest in Kazakhstan. He also announced his support for the actions of the Kazakh authorities to overcome the tragedy and stabilize the situation in the country,” the message says.

The Foreign Minister of Kazakhstan thanked his Iranian counterpart for support. “He noted that the leadership of Kazakhstan is taking concrete measures to ensure the safety of the population and return to normal life. At the end of the conversation, the interlocutors stressed the need to maintain a high level of bilateral relations," the press service clarified.

Russia, Iran and Turkey opposed separatism in the SAR

BRICS countries spoke out against protectionism in the global economy 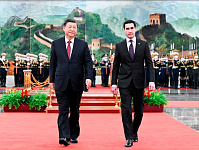 Putin and Atambayev met in an informal setting