India hopes for Russia's participation in G20 events during its presidency.

India is counting on Russia's participation in the Group of Twenty events that New Delhi will hold as part of its chairmanship in the association. This was stated on Thursday at a briefing by the official representative of the Indian Foreign Ministry Arindam Bagchi.

"Russia is a member of the G20. And, therefore, we will expect that it will participate in the process," he said, answering a question about Russia's participation in the G20 events during the Indian chairmanship of the group, which officially began on December 1.

As Bagchi stressed, the Group of Twenty is "an important association that works on the basis of an important principle — the principle of consensus." "And as chairman, India will build this consensus. And we have already dealt with this in the final part of the [G20] summit in Bali," he said.

Bagchi also noted that the G20 should speak with one voice about all the particularly important problems of the world." "We will, of course, focus on the problems that concern developing countries, especially the countries of the global South, mainly on problems related to food, fuel, fertilizers," the diplomat said.

During the G20 summit in Bali, Indonesia, India played an important role in the process of agreeing on the wording on the topic of Ukraine in the final communique. In particular, most of the G20 countries, as noted in the document, "strongly condemn the war on Ukraine", but among them there are "other opinions about this situation." It was the Indian side that insisted that there be a corresponding paragraph in the final statement of the summit. Also, the communique, as indicated by the Indian Foreign Ministry, reflected the statement of Indian Prime Minister Narendra Modi that today is "not the era of wars." It helped to bridge the gap between the summit participants in the preparation of the part of the document concerning the situation on Ukraine.

India on Thursday officially accepted the powers of the chairman of the G20. For her mission, she chose the theme "One Land, one family, one future." The Indian Prime Minister has previously stated that the presidency of the G20 for his country will be inclusive, ambitious, decisive and action-oriented. He stressed that India is taking responsibility for unification at a time when the world is simultaneously struggling with geopolitical tensions, economic downturn, rising food and energy prices, as well as the long-term consequences of the Covid pandemic.
Russia India G20 Summit TASS
|
Facebook
|
Twitter
|
VKontakte
|
Odnoklassniki

Emir of Qatar to take part in bilateral talks in Astana 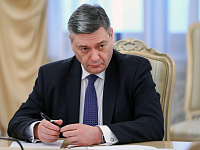 Oman introduces new principle of succession to the throne

Vladimir Putin will take part in the Caspian Summit in Ashgabat

Russian sailors celebrated Navy Day at the Syrian base Tartus