The countries of the Association of Southeast Asian Nations (ASEAN) and India agreed to strengthen cooperation in the field of maritime security.

Malaysian Prime Minister Najib Razak said this after the ASEAN-India anniversary summit held in New Delhi, according to the New Straits Times on Friday.

"Association leaders welcome the aspiration India to develop cooperation with the organization, we believe that security issues are key in bilateral relations," the prime minister said. According to him, "ASEAN and India should deepen cooperation on security issues, especially those related to capacity building, exchange of information on preventing and combating maritime crimes, including non-traditional threats - terrorism, extremism and piracy."

In a conversation with journalists, Najib Razak also noted the growing trade turnover between the Association and India. "In 2016, it amounted to $58 billion, and last year - already $72 billion. Thus, New Delhi became the sixth trading partner of ASEAN," the prime minister said.

Serdar Berdimuhamedov received invitations to visit a number of countries

Russia and Vietnam decided to triple the annual turnover 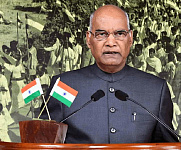 Volodin begins his visit to Seoul, where the Meeting of Speakers of the Eurasian Countries’ Parliaments will be held

Moscow will host the CSTO anniversary summit on May 16

Israeli scientists have created a new neural network architecture for re

Cadets congratulated the Honorary President of the Andrey Karlov Memoria

Tajikistan is negotiating with partners in the oil and gas industry

Saiga population is recovering in Kazakhstan

The first university Competence Center in the field of cybersecurity wil