The President of Tajikistan received the head of the Kazakh government.

On July 11, President of Tajikistan Emomali Rahmon received Prime Minister of Kazakhstan Askar Mamin, who was in Dushanbe on an official visit.
< /tbody>
According to Sputnik, during the conversation, the Tajik leader said that the development of trade and economic cooperation with Kazakhstan "is in the foreign policy priority of the republic's leadership."

The parties discussed the prospects and directions of expansion of the Tajik-Kazakh trade and economic th cooperation. At the same time, issues of intensifying cooperation in the investment sphere, in particular, attracting direct Kazakhstani investments in the Tajik economy, occupied a special place.

Emomali Rahmon emphasized that Tajikistan is ready to offer Kazakhstan a number of promising investment projects in the agro-industrial complex, energy, light industry and transport.

Earlier, negotiations with the head of the Kazakh government were held by his Tajik counterpart Kokhir Rasulzoda.

The prime ministers noted that Kazakhstan is one of the leading partners of Tajikistan. Mutual trade turnover between the countries is approaching $900 million. The parties agreed to increase it to $2 billion.

As a result of Askar Mamin's visit to Tajikistan, an agreement on cooperation in the transport sector was also signed. It was signed by the Kazakh export insurance company KazakhExport and the state carrier of Tajikistan "Tajik Railway" with the participation of the Eurasian Development Bank (EDB).

As noted in the joint statement, the document reflects the interest of the parties "in establishing long-term mutually beneficial cooperation aimed for the implementation of projects in the field of transport infrastructure in Kazakhstan and Tajikistan using the products of Kazakh exporters-manufacturers.

In total, during the visit of the Kazakh Prime Minister, the parties signed 11 documents aimed at strengthening Kazakh-Tajik cooperation, for a total amount over $80 million

Inspection from the other side: Taro Kono surveyed the "northern territories" of Japan from Cape Nosappu 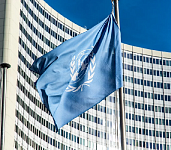 Mongolia celebrates the anniversary of joining the UN

Israel and the UAE have ratified a free trade agreement