Baku is ready to normalize relations with Yerevan

Azerbaijan is ready to normalize relations with Armenia, including signing a peace agreement and starting the process of border delimitation. This was stated by the Minister of Foreign Affairs Jeyhun Bayramov, speaking on Friday at the meeting of the CIS Council of Foreign Ministers in Dushanbe, the press service of the Foreign Ministry of the republic reported.

“The Minister noted that the Republic of Azerbaijan is ready for normalization of relations with Armenia, including the signing of a peace agreement and the beginning of the border delimitation process. In this regard, he said that steps are being taken to start negotiations on a peace agreement, in particular, the chairmen and the format of the national commissions for the delimitation of borders between the two countries have been determined,” the message says.

Jeyhun Bayramov< /b> also stressed that “the conflict is in the past, now the main task is to revive the territories liberated from occupation, restore economic and communication ties, ensuring long-term peace and stability.”

November 9, 2020 leaders Russia, Azerbaijan and Armenia signed a joint statement on the complete cessation of hostilities in the conflict zone around Nagorno-Karabakh. As a continuation of the settlement process, on January 11, 2021, they met in Moscow. It signed a new joint statement, which, in particular, provides for the unblocking of all economic and transport communications in the region, and an agreement was reached to create a tripartite working group at the level of deputy prime ministers to solve this and other tasks. On November 26, 2021, the three leaders met again, this time in Sochi. They agreed to take steps to increase the level of stability and security on the Azerbaijani-Armenian border, and also stipulated the need to create a bilateral commission for the delimitation of the border with its subsequent demarcation, Russia expressed its readiness to provide advisory assistance at the request of the parties.

At the meeting in In Brussels, on April 6 this year, President of AzerbaijanIlham Aliyev, Prime Minister of Armenia Nikol Pashinyan and President of the Council of the EU Charles Michel instructed the foreign ministers to begin preparations for negotiations for a peace agreement.
Azerbaijan Armenia MFA relations Jeyhun Bayramov TASS
|
Facebook
|
Twitter
|
VKontakte
|
Odnoklassniki

Vladimir Putin and Bashar al-Assad met in the Kremlin

For the first time in history, a woman has become the President of the Cypriot Parliament

The Kremlin monitors the situation in Myanmar 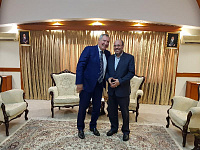 For the good of the planet, the roads of the Chinese West – see "Chinese Panorama"-439