Nikol Pashinyan congratulated Ebrahim Raisi on the anniversary of the victory of the Islamic Revolution and invited him to Armenia.

On Prime MinisterNikol Pashinyanon on Friday sent congratulations to President of Iran Ebrahim Raision the Islamic Revolution Victory Day and invited to visit Armenia. This was reported by the press service of the Armenian government.

“Noting the purposefulness of Armenia and Iran to strengthen peace and stability in the region, I confirm the official invitation to visit Armenia to discuss issues on the bilateral agenda. I am convinced that thanks to joint efforts, we will be committed to deepening the Armenian-Iranian interstate relations at a high level, the multifaceted agenda of our cooperation will be further expanded for the benefit of our peoples and countries, the message says.

Emomali Rahmon will arrive in Tashkent

Shinzo Abe: Negotiations 'don't start from a 'get out of here' attitude'

Vladimir Putin and Xi Jinping had a telephone conversation 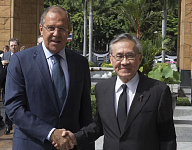 Putin: India and China are defending an independent attitude towards Russia

Yak-130 service center to be created in Malaysia