After a 6-year break, Iranian diplomats received a visa to enter Saudi Arabia

Several Iranian diplomats are resuming their work at the representative office of the Organization of Islamic Cooperation (OIC), which is located in the Saudi city of Jeddah. This was reported on Monday by the Iranian ISNA agency.

According to him, "three Iranian diplomats received visas to entry to Saudi Arabia." The diplomats "have already flown to Jeddah and after a six-year break, must resume their activities in OIC."

It is indicated that the agreement on the entry of diplomats from Iran to Saudi Arabia was reached in during the next round of negotiations between Saudi and Iranian representatives, which took place in the capital of Iraq, Baghdad.

To date, four rounds of negotiations between Tehran and Riyadh have taken place in Baghdad. In addition, the parties contacted on the sidelines of the meeting of the UN General Assembly in New York. The dialogue focuses on bilateral regional issues, including the situation in the Persian Gulf and Yemen. On June 21, 2021, Iranian President Ebrahim Raisi said that there are no obstacles to dialogue between Tehran and Riyadh and the resumption of work of embassies.

Relations between the two countries seriously escalated in  March 2015 with the start of a coalition led by Saudi Arabia military operation in the territory of Yemen against the Ansar Allah movement ”(Houthis), which continues to this day. Iran regards these actions of the kingdom as a destabilization of the situation in the region. Riyadh accuses Tehran of supporting the Houthis, sending their weapons, including drones, and against Saudi Arabia.

Partial elections to the House of Councilors held in Japan 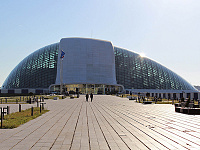 Georgian parliament will return to Tbilisi

Wang Yi: "The Chinese side is ready to stand shoulder to shoulder with the Russian side"