National park "Samursky" will be created in Dagestan

The territory includes two clusters with a total area of about 50 thousand hectares.

We are talking about the flat coastal area "Samur Delta" and the high-mountain "Shalbuzdag". Russian Prime Minister Dmitry Medvedev signed the corresponding document. It is published on the Cabinet website.

The natural park is located in the Akhtyn, Derbent, Dokuzparinsky and Magaramkent regions on the lands of the forest fund. It is assumed that the basis of the flat section of the national park will be the territory of the reserve, which is adjoined from the north by forests near the border of the Derbent and Magaramkent regions.

also rare and endangered plants listed in the Red Books of Russia and Dagestan.

Of the mammals that are in the region - Caucasian subspecies of the otter, forest cat and jungle cat. Rare fish species inhabiting the coastal waters of the Caspian Sea and the lower reaches of the Samur River include the Caspian lamprey, spike, sturgeon, beluga, sterlet, white salmon, Volga herring, Caspian trout, kutum and Ciscaucasian loach. 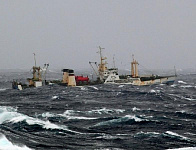 A storm is coming to the shores of Kamchatka

Apple orchard to be planted in Astana

In China, man will coexist harmoniously with nature

For the first time since the 1970s, the Amur goral was discovered in the Land of the Leopard park