In the Kolyma are going to create a national park "Chersky"

Scientists have proposed the creation of a national park in the Kolyma to compensate for environmental damage.

Biologists have proposed the creation of a transboundary specially protected natural area (PA) between Yakutia and the Magadan region to protect the flora and fauna, as well as the natural landscapes of the Upper Kolyma basin. Elena Khamenkova, scientific secretary of the Institute of Biological Problems of the North of the Far Eastern Branch of the Russian Academy of Sciences,

Industrial development of the Upper Kolyma began almost 100 years ago. Under conditions of permafrost, alluvial gold mining in this area catastrophically destroyed the valleys and talik floodplains of the rivers, in which almost the entire biotic potential of the mountain taiga landscape is concentrated. According to scientists, over the years of development of the Upper Kolyma placers, valleys with a total length of about 3.7 thousand km and an area of over 1.55 thousand square meters have been completely destroyed. km. The space covered by the results of alluvial gold mining occupies almost 50 thousand square meters. km.

"The proposal to create a national park" Chersky "has already been supported by the government of the Magadan region. It is assumed that the national park will consist of two large clusters, one of them will be located in the north of the Magadan region on the border with Yakutia. The national park is intended become one of the elements of compensation for environmental damage from almost a century of alluvial gold mining.Conditions will be created for the preservation of still untouched wilderness areas and the habitats of Red Book species of birds and animals - gyrfalcon, musk deer and others.In addition, a section of the park proposed for inclusion in The composition of the Omulevsky cluster is a unique example of diverse mountain glacial landscapes of the entire North-East," said Elena Khamenkova.
About the clusters

It is assumed that the park will be located in the north Magadan region - in the Susumansky and Yagodninsky districts, in the southern spurs of the Chersky ridge. The area is located in the southern borders of the Arctic region in accordance with the views of the Arctic Council (CAFF border) and can be considered as a model point for tracking the dynamics of natural changes on the border of the Arctic zone of the Russian Federation. Scientists propose to create two clusters - "Jack London's Lake" and "Omulevsky Park". The total planned area of the park is 9.1 thousand square meters. km.

The Jack London Lake cluster is proposed to be located on the left bank of the upper Kolyma and the Bolshoy and Maly Annachag ranges, which are part of the Chersky mountain ranges. The natural value of the territory is made up of mountain lakes, alpine landscapes with glacial valleys and moraines, mountain and valley flora and fauna of the Upper Kolyma basin. The glacial lake of Jack London is included in the list of the most important wetlands of the Magadan region.

"Four sites of the Stone Age are known to be discovered on the territory of the cluster. Multiple finds in the pits indicate the prospects for further archaeological work. places for butchering animals, remains of dwellings, workshops for making stone tools, finds of bone tools, ceramics,” Khamenkova said, noting that the area is promising for research by historians, archaeologists and biologists.

The second cluster is a mountain-lake a region bounded by the ridges of Okhandya, Cherge, Ulakhan-Chistai, Omulevsky Middle Mountains. Its natural value is mountain lakes. Their diversity and altitudinal zonality have formed a natural complex unique for the North-East of Russia. The cluster includes several large (up to 23 sq. km) and deep-water (up to 110 m) lakes adjacent to different parts of the Kolyma River basin. The intermountain basin, in which the lake-river complex was formed, continues to the north, to the territory of the Republic of Sakha (Yakutia), where the Momsky National Park has already been created.

This area is included in the list of the most important wetlands of the Magadan Region, is rich in rare and Red Book species, as well as historical monuments. Since ancient times, this is the territory of active residence and management of the indigenous population of Kolyma. It is known about three sites up to 10 thousand years old, two sites up to 7 thousand years old, which are evidence of the Walba culture of the Northeast, linking the ancient peoples of these places with the population of Chukotka and Kamchatka.

Separate sections of the cluster are evidence modern history of the Gulag period. It is known about the location along the Omulevka River of the landing strips of the migratory regiments of the Alaska-Siberia route, as well as one of the camps of that period.
On compensation for environmental damage

developed by alluvial gold mining. "This type of extraction of "metal number one" is considered one of the most detrimental types of mining operations for natural complexes. On the territory of the Magadan region, it still accounts for most of the work of miners. The region occupies a leading position in the country in this type of mining activity. At the same time, environmental requirements for it are lower than in ore gold mining," the biologist specified.

As a result, Elena Khamenkova added, for almost a century of large-scale industrial a major environmental anomaly that can be seen from space. "The development of a network of specially protected areas that retain high conservation value and their reservation can compensate for the scale of devastation. In this regard, the southern margin of the Chersky ridge deserves special attention, [since] the Cherge and Okhandya ridges still serve as a barrier that protects this unique natural and the historical and cultural value of the site from the onslaught of miners," the expert explained.

Scientists believe that the northeastern part of Russia is not only a storehouse of mineral wealth, but also a region where pristine landscapes and unique biodiversity have been preserved. "The mountain-lake region in the southern part of the Chersky Ridge is one of the indisputable objects of the natural heritage of the Far Eastern North. This territory could become a reference point for monitoring the dynamics of biota on the southern border of the Arctic strip of Eurasia, serve as a link for trans-Bering studies and get things off the ground development of the ecological network of the Magadan region", - says Elena Khamenkova.
Russia eco-environment Kolyma national park TASS
|
Facebook
|
Twitter
|
VKontakte
|
Odnoklassniki 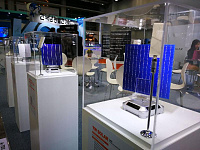 Elephant plays the harmonica in India

Locusts move across India, sweeping away everything in their path

Indians enjoy the longest lunar eclipse of the 21st century