According to ornithologists, this is the largest find of the 21st century.

Researchers at the National University of Singapore and the Indonesian Institute of Science have announced 10 new species and subspecies of feathered creatures found on just three Indonesian islands. In search of new birds, scientists went to the islands of Taliabu, Peleng and the Toga group of islands located near Sulawesi.

In the local forests and highlands, there are tropical feathered inhabitants that rarely leave the shade of trees. In total, the expedition discovered 5 new species and as many subspecies of songbirds, each of which was confirmed by DNA analysis and given its own name. Thus, the ornithological reference books will be replenished with the Pelengsky fantail, which loves to feast on fruits and nectar. At the sight of danger, it shows its fluffy and bright tail.

In addition, scientists have recorded a species that literally translates as "Wonderful Grasshopper". The bird got its name for the unusual chirping sounds that it makes.

Ornithologists note that most of the new bird species have recently been discovered in Brazil and Peru. Despite the fact that unexplored places remain in Indonesia, the chance of repeating such a find in the future is small. The researchers hope that the Indonesian government will consider granting protected status to the discovered birds.

Birds of prey to be registered in Kyrgyzstan 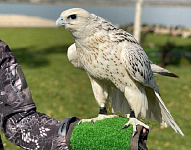 The second international falconry center will appear in Russia

Israeli vegans call for meat to be declared dangerous

Bridge between Crimea and Taman reopened