An exhibition of paintings of Arabic calligraphy by a Chechen author has opened in Moscow.

The exhibition of paintings "28 letters of Arabic calligraphy", dedicated to the 100th anniversary of the formation of the Chechen Autonomous Region as part of the RSFSR, opened in the Public Chamber of Russia. Many of the works presented tell about the content of the Koran, the author of the paintings, chairman of the Public Chamber of Chechnya Ismail Denilkhanov told TASS.

"For a certain part of the Muslims of Russia, Islam, the Koran and the Arabic language are very important, they carry important meanings. For the Moscow audience, most likely, this is an attempt to touch what is valuable for us [Muslims]," Ismail Denilkhanov said.

According to him, it took him about a year to create 28 paintings for this exhibition. To create the paintings, the author used six styles of Arabic calligraphy in a modern interpretation. The motivation for their creation, Denilkhanov admits, was the desire to teach people the Koran.

"Until 1926, in our republic they wrote in Arabic script - books were published, certain literature was printed. After 1937, we got the Cyrillic alphabet. Accordingly, this is also the historical memory of the people, because all our tombstones, all the inscriptions on them are in Arabic, this is an important moment for us. And if we take into account such moments of each nation, I think it will only strengthen us, because Russia is strong in the diversity of peoples," the author explains.

In his collection, he highlights the painting "Love". "There are several pictures in it at once - the word "Love" is written on top, and at the bottom is a surah from the Koran, where the Almighty confesses his love to the prophet. I expressed this surah through the word "love".", Ismail Denilkhanov explained.

The Chairman of the Public Chamber of Chechnya plans to create an online version of this exhibition. "Our task is to make a clear and accessible website, an online exhibition, so that a person can go in, read comments on what the picture carries. <...>. We hope that by the end of the year [the online exhibition will be launched]," he concluded.
Russia Chechnya Moscow exhibition paintings Calligraphy TASS
|
Facebook
|
Twitter
|
VKontakte
|
Odnoklassniki

Hermitage-Ural will open in Yekaterinburg next year

An exhibition dedicated to Dostoevsky opened in Nur-Sultan 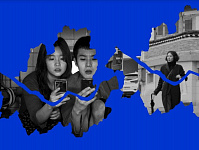 Moscow has prepared a special film program for the Moscow-Seoul: Common Ideas exhibition

Israeli archaeologists have discovered the site of the appearance of Christ