The exhibition of the wildlife festival "Golden Turtle" opened in Vladivostok

Visitors to the exhibition will be able to see the works of photographers Magnus Lundgren, Kevin Morgans, Mate Benz, Joel Delma and others.

The exhibition of the international wildlife festival "Golden Turtle", which takes place as part of the cultural program of the Eastern Economic Forum, opened on Saturday in Vladivostok. This was reported to TASS by the deputy director of the Primorsky Cultural and Historical Center Alevtina Legkoshkurova.

"The exhibition opened on Saturday, September 3, and the official opening will take place on September 5, Monday," she said.

The Golden Turtle is the largest ecological and educational project, for 16 years it has united more than 30 thousand photographers from 152 countries. At the exhibition, visitors can see images of wildlife from five continents. The works of famous photographers are presented: Magnus Lundgren (Sweden), Mate Benz (Hungary), Kevin Morgans (Great Britain), Joel Delmas (France) and many others.

In addition to the exhibition, excursion programs for schoolchildren, a film screening "Land of the Leopard. 10 years" and lectures and master classes from eco-experts and wildlife photographers.

The VII Eastern Economic Forum will be held in Vladivostok from September 5 to 8, the main theme of the forum is "On the way to a multipolar world". The forum is organized by the Roscongress Foundation. TASS is the general information partner and the official photo-hosting agency of the event.
Russia Vladivostok WEF-2022 exhibition festival TASS
|
Facebook
|
Twitter
|
VKontakte
|
Odnoklassniki

The Delphic Games will be held in the capital of Kyrgyzstan

Tyrannosaurus rex comes to Malaysia to be vaccinated against coronavirus 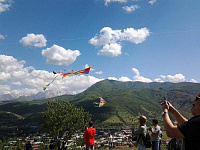 The annual kite festival was held in Charvak, Uzbekistan

Archaeologists from China have discovered the oldest prints of children's hands

Soyuzmultfilm's new projects will be shown in China and Israel

The beauties of Moscow will be shown at ITB Asia 2018