The XIV International Film Festival "Pearl of the Silk Road" takes place from September 13 to 18 in Tashkent. The program of the event includes a screening of 150 feature, documentary and short films.

More than five hundred filmmakers gathered in the capital of Uzbekistan. Actors, directors and cameramen, producers and film critics, as well as media representatives from 40 countries of the world. The attention of journalists was also attracted by the Film Days of the Shanghai Cooperation Organization countries, which are being held in Uzbekistan these days in honor of the SCO summit.

While pressing political and economic issues are being actively discussed in Samarkand within the framework of the SCO summit, an equally grandiose festival of cinema works is being held in Tashkent.

"I think that, of course, Chinese cinematography is the most developed of the SCO countries today, both technically and creatively, and in the names of young directors. These are unsurpassed masters. I don't rate Chinese cinema by the number of international awards. You see, there are several films that are masterpieces, but the general level of Chinese cinematographers, of course, is very high, and I think this is how a great people should be," said Adi Khamraev, a film director from Uzbekistan.

Among the guests are Inna Shalyto, the head of Roskino, Serik Abishev, Vice President for Production of Kazakhfilm, Akzhol Bekbolotov, director of the Kyrgyzfilm National Film Studio, and many others. There are also a lot of participants from Uzbekistan.

"Frankly speaking, cinematography is developing at a rapid pace. Now there is a struggle for viewers all over the world. Over time, the borders disappear, and the viewer, if he wants, watches Chinese cinematography, and wants - Uzbek or Hollywood, or Russian. There are no such borders now. Therefore, it can be called a kind of competition. After all, in fact, the purpose of the film festival is to discover young and talented filmmakers," said Matekub Matchanov, an actor from Uzbekistan.

During the business part of the program, it is planned to hold forums to strengthen cooperation between the SCO countries in the field of cinematography.

"The SCO is also taking place now, this is also very important for Uzbekistan. And this is the movie especially, why is it necessary? Because we learn from cinema, not only we, the cinema workers, but also the people are brought up, learning. We take new technologies from them, we test and develop our technologies. I believe that this organization is still at the highest level, we know what is being done in the world of cinema," said Munavvara Abdullayeva, a director from Uzbekistan.


Creative meetings with cult directors, actors and representatives of the film industry are planned as part of the film festival.

"The festival is quite large scale, which pleasantly surprised me. Everything is very beautiful, I really liked everything," said Herbert Ulrich, an actor from Germany.


Until September 18, the film "The Younger Brother of Angels" from Tajikistan, the Indian film "Reva", and several works by Russian directors are expected to be shown. The audience will also be presented films from European countries, including Poland, France, Romania. It is expected to conclude several contracts for the creation of joint film production. The Cinematography Agency of Uzbekistan and the Russian film studio Mars Media have already agreed to make a film together about people who found themselves in the epicenter of the devastating earthquake in Tashkent in 1966. 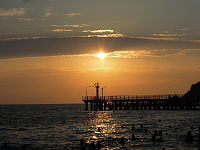 A public beach will appear on Olkhon

Schoolchildren of Kazakhstan were carried away by "Poetic battles"

Hobbit Village opens in the Philippines