The 44th Moscow International Film Festival will be held from August 26 to September 2.

The chairman of the selection committee of the festival was the journalist and producer Ivan Kudryavtsev. "The MIFF will be truly international and incredibly broad in scope.

More than 230 paintings will be presented in the competitive and non-competitive programs of the festival. They will be represented, according to our calculations, at the moment - there are still additions and various surprises - 65 countries of the world. I think this list will increase. The festival, despite the difficult political and cultural context, turned out to be very balanced in terms of representation of countries," Ivan Kudryavtsev noted, pointing out that this year the MIFF is held under the motto "Search and Discovery": the discovery of new countries and names and the search for new growth points in cinema. The opening film will be the picture "The Heart of Parma" directed by Anton Megerdichev based on the novel of the same name by Alexey Ivanov (Russia), the film "The Decision to Leave" by Park Chang-wook (Republic of Korea), awarded the prize for best director at the Cannes Film Festival, will close the MIFF.

The geography of the countries whose cinematographers wished to present their premieres at the MIFF extends from Argentina, Brazil, Peru, the USA and other countries of the Western Hemisphere - to Great Britain, Serbia, Italy, France in the west of our continent and India, Iran, the Middle East, China, Southeast Asia and even Oceania.  Regular viewers of the TV channel "Big Asia", who will be in Moscow these days and are interested in modern cinema of the Asian region, we recommend watching the following out-of-competition programs among the rich variety of screenings of the 44 Moscow International Film Festival:

A panorama of unforgettable — poignant, paradoxical, funny and tragic — stories; three sessions (each with its own mood); a total of twelve feature films, animation and a documentary film day.
Festival screenings and film premieres will be held at nine film venues in the capital. By tradition, the largest and most important of them in terms of the number of screenings, halls, guests and participants of the 44 MIFF, will be the multiplex cinema "Karo 11 October".

Glass bridge to open in Vietnam

Coffee and Tea Festival to be held in Georgia 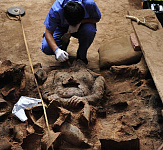 Pitching staged for Chinese film producers at the Ministry of Culture