The information partner of the festival was the Caucasian Nature Reserve.

The festival of "green" documentaries about global environmental and climate problems opened on Friday evening in the mountains of Sochi, screenings of films will continue until October 9, admission is free, Deputy Director for Sustainable Development of the Gazprom resort Gulnara Rakhmangulova told TASS.

"On Friday, the opening of the Ecodoc Festival, the receiver of the Ecocup international documentary Film Festival, took place. The format of the festival allows you to learn the opinion of experts, express your point of view, look at well-known problems from a different angle, draw conclusions and be inspired by interesting projects," Gulnara Rakhmangulova said.

The information partner of the festival in Sochi was the Caucasian Nature Reserve.

"Viewers will have a unique opportunity to watch five documentaries that are not freely available and not seen on big screens. After the films, discussions with invited speakers will take place: these are researchers of the Caucasian State Reserve, employees of the local eco-farm, representatives of resorts," the agency interlocutor noted.

During the opening of the festival, the Russian premiere of the film "Lagunaria", shot in Italy in 2022, took place. The movie is dedicated to Venice and tells about the future. Also on October 8 and 9, viewers will be able to evaluate the film "Res Creata: People and Other Animals" (Italy, 2019), the picture "There is no right wrong life" (Germany, 2021), the tapes "Sheep Hero" (Netherlands, 2018) and "Bread" (Austria, 2020). "These are really interesting and touching films that help people think about environmental issues, climate change, and what needs to be changed now to prevent global catastrophes in the future," Gulnara Rakhmangulova said.

Turkey has become the most popular among Russians

Turkey has developed new entry rules for tourists and vacationers 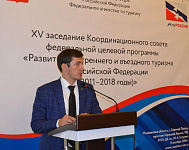 The director of the Crimean safari park "Taigan" Oleg Zubkov went to the hot country of Southeast Asia, Laos, to bring elephants from there

Russians will celebrate the New Year in the Krasnodar Territory