The Shukshin Film Festival has started in Barnaul

The All-Russian Shukshin Film Festival has opened in the Altai Territory.

The All-Russian Shukshin Film Festival, which is the key event of the festival "Shukshin Days in Altai", opened on Tuesday in Barnaul. More than ten paintings in the full-meter program will compete for the main prize for five days.

"We are opening the film festival for the 24th time. <...> Three years after the 90th anniversaryVasily Makarovich Shukshin, for the first time, we can hold all the events that are part of the festival on a full scale. His work inspires, makes us think about our actions on earth. The film festival is, as always, a review of new ideas, of course, a review of the creativity that the films included in the short and full—meter programs are filled with," the governor of the region said at the opening ceremony Victor Tomenko.

According to him, all the films of the festival will be given a professional assessment, and the victory will be awarded to the one whose film will correspond to the motto of the festival "Morality is truth".

Honored Artist of Russia was among the honored guests of the festival on the red carpet Olesya Sudzilovskaya, actorPavel Derevyanko, creative teams of the participating films, members of the writers' delegation. In the lobby of the Drama Theater, where the opening is taking place, the guests laid flowers at the bust of Shukshin.

"I congratulate you on the holiday of the nugget, the greatest Russian actor of the XX century, novelist, director. I would like to note his multifaceted talent, the importance of his wonderful prose, which speaks about simple "little" people," the poet, essayist and translator from St. PetersburgAlexey Purin.

More than ten films in the competition program will compete for the main prize of the festival — a vase made of Revnevskaya jasper by the masters of the Kolyvan stone—cutting plant, a copy of the Queen of Vases from the Hermitage. The film "Peppermint Gingerbread" will open the film festival — the director will present the picture to the audienceAndrey Karasov. Other participating films include the drama "Mondays"Evgenia Grigorieva, "Duluur: mas-wrestling"Valentina Makarova, "Ivanovo happiness" Ivan Sosnin, "Dream"Maria Batova, comedy "Marusya Foreva!"Alexandra Galibina, "Disobedient"Vladimir Kott, "Parents of strict regime"Nikita Vladimirova, "My dad is a leader"Egor Konchalovsky, melodramas "Offseason" Alexander Hunt and "Are you Alive?"Ildar Yagafarov.

Israeli archaeologists have discovered the site of the appearance of Christ

Products of the Russian film industry presented in Dubai

10 tons of pilaf cooked in Tajikistan

Musical fountain to open in Vladivostok

Russia and China are preparing to cancel visas 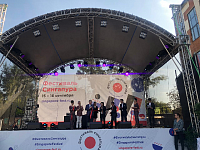 The first festival of Singapore took place in Moscow