Orientalist Alexei Maslov, head of the Institute of the Far East of the Russian Academy of Sciences, spoke about the happiness of Bhutan in his Telegram channel.

There is a wonderful country where, according to official statistics, none of the inhabitants got sick   coronavirus. Where the economy is growing at 2.45% per year. And while GDP per capita is low at $3,128, which is only 25% of the world average, it uses a very different measure of success. This is “gross national happiness”, which is an alternative to the abstract and obscure to the majority of the population GDP. This country is Bhutan.

According to the latest census conducted in  2015  year by the Ministry of Happiness (yes, yes, there is such a thing!), 35% of the population answered that they were “extremely happy”, 47.9% said they felt “moderately happy”, and only 8.8% of respondents answered that they are "dissatisfied". Compare this with your state of mind...

There are wonderful rules and laws: tough, but fair. Killing an endangered animal is punishable by life imprisonment. According to the constitution, more than 60% of the country's territory must remain planted with trees. In order to preserve ancient Bhutanese customs, since 1990 all Bhutanese have been required to wear traditional dress. Bhutan is the only country that absorbs more CO2 than it emits.

No, not everything is as great as it seems, for example, the cost of food in Bhutan rose by 8.94% in June 2020 compared to same period the previous year, and the unemployment rate in Bhutan rose from 2.40% in 2017 to 3.40% in 2018. But the population is still "extremely" or "moderately happy", and the "Ministry of Happiness" regularly monitors this. morals. And although a visa to Bhutan costs about 20 dollars (and also a guarantee that you have at least 250 dollars for each day of your stay), the government specifically limits the influx of tourists so as not to "overload the country." Probably so that "extreme happiness" would not be destroyed. And the most surprising thing is that there are not so many foreigners who would like to move to this “kingdom of happiness” for a long time: they just have different ideas about “happiness”. - said Alexey Maslov.

Blagoveshchensk and Heihe will be connected by cable car 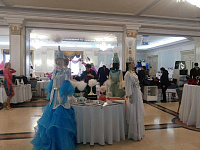 India and Pakistan agree to organize a pilgrimage

A video tour of the Albrecht Dürer exhibition has appeared

The exhibition opened at Salekhard Airport

The United Arab Emirates will postpone the weekend