On September 13, at the Jawaharlal Nehru Cultural Center at the Embassy of India in Moscow, a solemn transfer of a classical stringed instrument, a recognized symbol of Indian musical culture – Vina, took place. 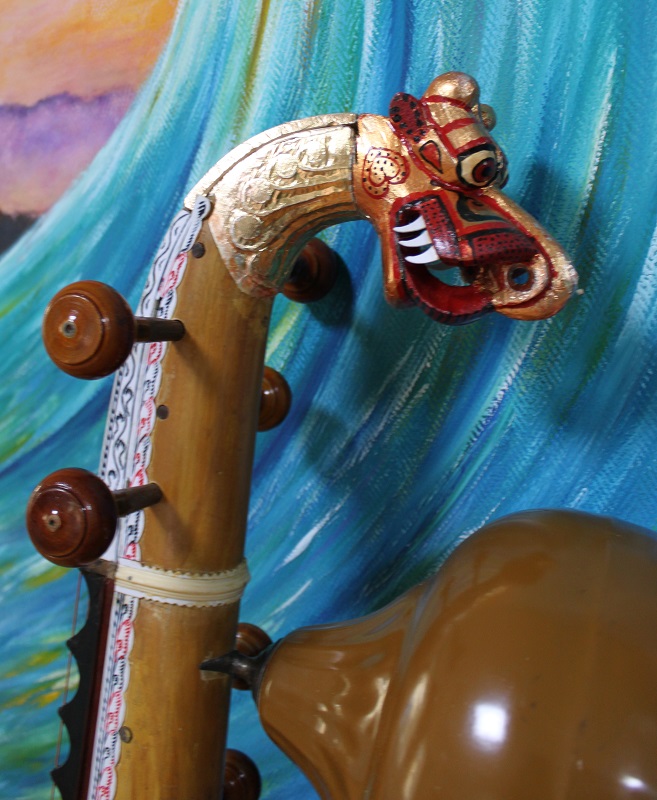 Music has been an integral part of Indian culture for centuries.  Instrumental music was played on the Indian subcontinent long before the appearance of written sources. Wine is one of the oldest musical instruments. This is a stringed plucked instrument, which is usually referred to as a type of lute. Over the centuries, the wine has been changing and improving before it acquired a modern look. Now in India, there are at least 50 types of guilt. The most famous is the South Indian wine or Saraswati wine. It is named after the Hindu goddess Saraswati, the goddess of knowledge and arts, who is usually depicted holding an instrument or playing it. Since the 18th century, the appearance of the sarasvati vina has not changed: a hemispherical resonator body made of wood, a wide long neck with 24 frets, 5 main and 3 additional strings. At the end of the neck is a stylized head of the mythical animal yali (half lion, half griffin). An additional resonator in the upper part of the neck is made of wood or dried pumpkin. The total length of the tool is up to 135 cm. Jackfruit (Indian breadfruit) wood is most often used, it is light and has high strength, clear fiber lines, and minimal swelling in moisture, in addition, it has excellent reverberation (a change in the intensity of sound when it is repeatedly reflected). The yellow color of the tree eventually turns dark red or brown, while improving the sound quality.

Wine occupies an important place in the instrumental music of South India. It is believed that this is an ideal instrument capable of reproducing the most subtle nuances of music. The ways of playing it changed, the technique became more complicated and, although there are many different schools, many techniques of sound production described in ancient treatises determine the practice of playing music on wine to this day.

Marble colonnade and desudéportes: experts describe the value of the Italian embassy building

Employees of the tourism industry gathered in the capital of Georgia

In the Philippines, there is an adult who collects figures from food baskets.

Jazz and rock music festival to be held in Damascus

Tashkent paid a debt to the Unknown Soldier

On the Night of the Arts, the Oriental Museum will show its “Secret Rooms”