The festival of Orthodox culture "Tsar Days" opened in Yekaterinburg

Excursions, master classes and musical evenings opened on Tuesday the festival of Orthodox culture "Tsar Days" in Yekaterinburg, dedicated to the 104th anniversary of the memory of the Romanov royal family. This was reported in the Department of information policy of the city administration.

In the multimedia historical park "Russia is my history. Sverdlovsk Region" will be able to visit several excursions dedicated to Russian emperors, including "Russia in the era of Peter I", "Alexander I: crowned Hamlet of the Russian Empire", "Nicholas I: the last Knight of the Russian Empire", "Alexander II: the Tragedy of the liberator" and "Russian wives of European monarchs. The fate of the daughters of Paul I".

In the cultural and educational center "Tsarsky" it will be possible to listen to the lecture "The Diaries of Grand Duke Sergei Alexandrovich as a historical source", as well as listen to musical evenings. Honored Artist of Russia will take part in the concert "The Tsar's theme in the Russian Opera"Irina Naumova and laureate of international competitions Anna Markova.

Earlier, TASS reported that the international festival of Orthodox culture "Tsar Days" will be held from July 12 to 20 in Yekaterinburg.

The festival is dedicated to the memory of the last Russian Emperor Nicholas II and his family members, who were shot at Ipatiev's house in Yekaterinburg on the night of July 16-17, 1918. He gathers tens of thousands of Orthodox people from all over Russia, from near and far abroad in the Urals.
Russia Yekaterinburg festival Orthodoxy TASS
|
Facebook
|
Twitter
|
VKontakte
|
Odnoklassniki

The Chechen Republic was liked by UAE tour operators

The first foreign branch of VGIK opened in Tashkent

Taiwan attracts Russians to its resorts 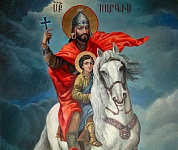 XXI Book Festival to be held in Tbilisi

A 700kg rice cake was made to a Japanese temple