An exhibition under this title will open at the State Museum of Oriental Art.

The exposition, which will run from February 5 to March 1, will be organized jointly by the Azerbaijan National Carpet Museum.

Accordingly, the central theme will be carpets and embroideries of the 1920-1970s with pictorial motifs of the Soviet period, which are in collections of two museums.

The exposition will tell about the phenomenon of the influence of historical cataclysms on arts and crafts. In particular, the audience will be able to get acquainted with 40 exhibits. Let us add that campaign textiles from the collection of the Oriental Museum will be presented at the exhibition for the first time in full.

These works once served as political propaganda tools. The plots connected with the revolutionary events were seriously influenced by the political poster.

In addition, oriental miniature, Qajar and fine arts, which received a powerful development in Azerbaijan in the 20th century, as well as book graphics and theater posters, also had an influence.

Master carpet weavers were not afraid to experiment, using images and forms of expression new to them, creating beautiful, monumental specimens.

To the opening of the exhibition “Echo of Soviet Azerbaijan. Carpet. Embroidery. Poster” the museum of the republic will prepare a catalog with the same name.

The Chairman of the European Commission, the Prime Minister of Kazakhstan signed a memorandum of understanding

Korean kids videos are taking over the planet

Doha and Da Nang to be connected by direct flight

The largest innovative library complex has opened in Dubai 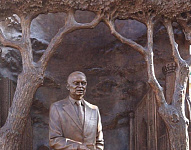 The memory of Islam Karimov was immortalized in Moscow