The Azerbaijani authorities have decided to cancel from October 1 a number of quarantine restrictions imposed in the country due to the coronavirus pandemic. The corresponding resolution was adopted on Friday by the operational headquarters under the Cabinet of Ministers of the Republic.

According to the document, the decision was made taking into account “an increase in the number of vaccinated citizens in the country, as well as a decrease in the dynamics of cases of infection.”

In particular, from October 1, the ban on work on weekends of public transport, including the Baku Metro, will be lifted. At the same time, after a break of almost a year and a half, the activities of recreation areas, children's entertainment centers, concert halls, cinemas are being restored with the condition that they will be filled by no more than half. Children's and other entertainment centers and cinemas at large shopping centers also resume work. In accordance with the new rules, people over 18 can use the services of these facilities only if they have a covid-passport.

The previous decision to ease the quarantine was made by the Azerbaijani government in early summer. At that time, the requirement to wear protective masks in the open air was canceled, places of worship were opened, large shopping centers, sports and recreation facilities resumed work, permission was given to hold weddings.

The first case of coronavirus infection in Azerbaijan was detected on February 28 last year. The peaks of the epidemic occurred in June (up to 600 cases per day), November-December (on average from 3.5 thousand to 4 thousand cases) last year, April (from 2 thousand to 2.5 thousand cases) and August (from 3.5 thousand to 4 thousand cases) this year. Since the beginning of September, there has been a gradual decrease in the daily increase in the number of cases of infection. According to the operational headquarters under the Cabinet of Ministers, during the pandemic, 478,715 cases of infection were confirmed in Azerbaijan, 446,643 people recovered, 6,415 patients died.

As of September 24, more than 8.2 million vaccinations. At the same time, over 3.5 million people out of a population of 10 million received both doses of the vaccine.

In Kazakhstan, the start date of revaccination has been announced

Russians will need a PCR test to visit Iraq

Coronavirus does not recede, but the capital of Russia is fully armed

Taxi has a new appointment in the capital of Thailand 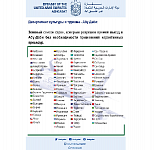 Turkmen tourists will be able to visit Abu Dhabi without quarantine

In St. Petersburg, the authorities vaccinate people right at the stadium