Tyumen State University (TSU) and industrial partner Sibur have opened a sequestration alley to create a future carbon farm. This was reported on Thursday in the press service of TSU.

The sequestration business deals with technologies for absorbing carbon dioxide from the atmosphere. Its basis is carbon farms. The alley is laid on the carbon landfill of the university, which is designed to study the turnover of greenhouse gases. For TSU, working with a small young forest area and organizing instrumental observations will prepare for the opening of the first large-scale forest-climatic project in the region with a potential area of hundreds and thousands of hectares.

"With a delegation of PJSC Sibur headed by Maxim Remchukov, Director of Sustainable Development, we started creating a sequestration alley at the Kuchak landfill. Such an informal event dilutes the business program of the TNF forum very well," the press service quotes the words of the Rector of TSU Ivan Romanchuk.

Representatives of organizations planted seedlings of triploid aspen on the carbon landfill of the university. Researchers note that this type of aspen grows faster, rapidly gaining phytomass and intensively absorbs carbon dioxide. These qualities will allow him to become an important part of future carbon farms, the creation of which is planned in the region.

The TSU carbon landfill - the first in Russia - was opened at the end of August 2021.

Iran and Gazprom will develop the Severnoye gas field

Kazakh helicopters will be delivered to Tajikistan

Azerbaijan and EU sign memorandum on strategic cooperation in energy 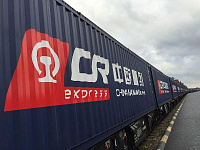 China Railway plans to expand to the Far East