A new waste paper recycling plant has been launched in Kuzbass

The company will produce paper and cardboard.

The Governor of Kuzbass, Sergey Tsivilev, opened a new waste paper recycling plant in Kemerovo. The company will produce paper and cardboard, including using a technology unique to the Russian Federation with antibacterial properties, a TASS correspondent reports.

"We, as in any region, have a problem with the processing of household waste. We produce about 1 million tons of waste [per year], 18-20% [of them] is paper, cardboard. This is a very serious environmental problem. This is the first project for 120 thousand tons of paper waste processing [per year] into packaging paper, which is needed for our manufacturers," Sergey Tsivilev said at the launch ceremony of the enterprise.

The project was implemented with the support of the SME Corporation, the SME Bank, the Industrial Development Fund and the regional government. Investments in the creation of production amounted to 2.9 billion rubles. The workshop with an area of more than 10 thousand sq. m. was built on the territory of the Kemerovo enterprise "Kuzbass Scarab". Every year, about 72 thousand tons of products will be produced here, including about 30 thousand tons of antibacterial paper and cardboard using a patented technology unique to the Russian Federation. It prevents the formation of mold and increases the shelf life of food and agricultural products.

The launch of a new production facility will create an additional 119 new jobs, which will increase the company's staff by more than one and a half times. Kuzbass Scarab, as a participant of the national project "Labor Productivity", uses lean technologies to increase production efficiency and increase output volumes.

In the future, it is planned to build another workshop for processing paper waste with a capacity of 300 thousand tons per year at the production site. "Thanks to the next stage, we will be able to completely recycle all [paper waste] that Kuzbass produces and not only. Our processing facilities will allow us to take [waste paper] from our neighbors for processing," the governor said.

Scientific and production cooperation The waste paper processing plant is an anchor resident of the Zapadny Industrial Park.

Its residents will be able to unite in cooperative chains for integrated waste management - from sorting to creating new goods during processing.

"In the next seven years, we intend to create a full-cycle production for the production of corrugated packaging, as well as several related enterprises for the processing of plastic waste and pulp production," Alexander Slyadnev, the founder of the enterprise, told about the development plans.

New enterprises will be able to obtain the status of residents of the Kuzbass special economic zone in order to take advantage of benefits and tax preferences. The development of the processing industry will give impetus to the development of mechanical engineering. "[There is] a problem of supplying equipment for such plants, manufacturing shafts. We will create production of this equipment for the whole country on the territory of Kuzbass," the governor explained.

Kuzbass scientists will also join the implementation of new projects. On the basis of the reference university of the region - Kemerovo State University - at the request of business, research will be conducted for implementation into the work of enterprises. The personnel issue will also be resolved. As explained to TASS in the press service of the university, KemSU will open 22 budget places in the direction of "Technology of printing and packaging production" in the new academic year. Trained specialists will be in demand at the new production facility.
Russia Kemerovo Sergey Tsivilev launch plant production paper TASS
|
Facebook
|
Twitter
|
VKontakte
|
Odnoklassniki

Rostec will exchange 25.1% in the Sukhoi Log field for a stake in Polyus

Turkey introduces a tax on accommodation 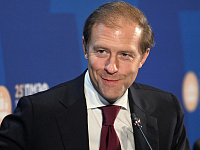 Eurasian Development Bank - in the largest deals concluded at SPIEF

Magas Airport may be given international status in April 2018