In December, a test production of the first batch of electric vehicles is expected in Ferghana - four cars and eight trucks, the press service of the regional hokimiyat reported. Khokim of the Ferghana region Khairulla Bozorov got acquainted with the car plant under construction for the production of future cars.

Now the workshops for assembly, testing, electrophoresis and painting are ready for the production process.

According to the press service, the khokim instructed to allocate empty areas of the Ferghana Mechanical Plant, where the project is currently being implemented, to create a workshop for welding body parts of electric vehicles.

Also, after launching at full capacity, the plant, where 350 jobs will appear, will be able to produce 10 thousand electric cars a year.

In addition, Gazeta.uz notes that Since the country has not yet developed a network of electric filling stations, at the first stage, cars will be produced with hybrid engines. If the charge level drops below 20%, the gasoline engine will be started, which will also be able to charge the battery of the electric car, the report says.

According to the publication, the cost of the project is $50 million. It is implemented by Central Asia Motors.

Russia can connect to the Chinese settlement system

Tuva will be connected with Mongolia by four transport corridors

In the Primorsky Territory, they plan to increase the volume of housing construction

Hong Kong may become a new candidate for RCEP membership 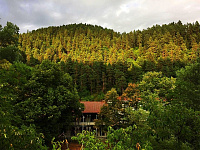 A luxury hotel will appear in the mountains in southern Georgia