Coal from Yakutia replaces Western analogues in the Chinese market

Mined in Yakutia coal successfully replaces Western analogues in the Chinese market, the press service of the Ministry of Economic Development of the Russian Federation reported on Friday, citing the head of the department Maxim Reshetnikov.

"Yakut coal successfully replaces Western analogues in the Chinese market. This was announced by the Minister of Economic Development of Russia Maxim Reshetnikov during a working visit to the Republic of Sakha (Yakutia)," the message says.

The press service added that according to the results of 10 months of this year, coal production in Yakutia amounted to 31.8 million tons, which is 29% more than in the same period last year. The share of tax revenues from coal mining companies in the consolidated budget of the republic increased from 1% in 2020 to 6% on November 1, 2022.

In 2023, further growth of coal production is expected in Yakutia. This can be achieved, among other things, thanks to the development of the Elginsky coal complex and an increase in the possible capacities of the resident of the TOP "South Yakutia" — the Kolmar group of companies. "Business is additionally invested in infrastructure. Now, at his own expense, the investor is building a railway from Elginsky coal deposit to The Sea of Okhotsk. In this way, it will be able to export an additional 30 million tons of coal per year by the end of 2025," Reshetnikov's words are quoted in the message.

The head of the Ministry of Economic Development of the Russian Federation on Friday became a participant of the Digital Diamond forum, which takes place in Yakutsk and is dedicated to modern technologies, digital media and the gaming industry. The main idea of the forum is to unite the leaders of the digital economy and industry experts in discussing the prospects for the development of the media industry, digital content and game development in the new economic reality.
Russia Yakutia China coal TASS
|
Facebook
|
Twitter
|
VKontakte
|
Odnoklassniki 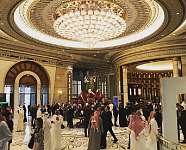 $100 billion returned to the Saudi budget

Russian-Singapore business dialogue to be held on March 26