The Kingdom of Jordan is gradually recovering from the pandemic

Jordanian authorities are starting to restart the economy after the lifting of quarantine.

The Government of Jordan lifted restrictions on the movement of nationals during the daytime and evening time from Friday. This was reported in its electronic version by the Ad-Dustur newspaper. According to her information, the curfew will now be in effect from 00:00 to 06:00 in the morning.

“The authorities of the kingdom are starting restarting the sectors of the economy, -said in a statement by the Jordanian Ministry of Health, which the publication cites. “However, the lifting of the quarantine regime does not mean the termination of the sanitary and epidemiological standards introduced at the beginning of the pandemic.” It states that citizens are still required to maintain social distance, wear protective masks and gloves.

Prime Minister Bisher al-Khasawneh, speaking to MPs on Wednesday, announced the decision to relax the quarantine regime introduced in January 15 December. He also said that the authorities will begin the process of gradually restarting the sectors of the economy.

Vaccination of the population

On January 13, a national campaign began in Jordan to vaccinate the population against the coronavirus. According to General Director of the Royal Military Medical Service, General Abdullah Amish, at the first stage, 68,000 people will be vaccinated. subjects. At the same time, he stressed that the number of residents who signed up for vaccination exceeds 240,000 people. Vaccinations are given to the elderly over 60 years of age, patients with chronic diseases, doctors and healthcare workers.

Earlier it was reported that lots of the Chinese vaccine Sinopharm (Sinopharm), as well as vaccines produced by the American company Pfizer (Pfizer) and  ;her German partner BioNTech (Biontek). In total, approximately 20% of Jordanians will be able to get vaccinated in 2021.

According to the Ministry of Health, 1,705 citizens were infected per day in Jordan, and 16 more died due to the coronavirus. Most of the people infected with COVID-19 were detected in the capital Amman and its environs - 531, followed by the provinces of Irbid - 188 and - El Balqa - 88. During the day, 25,014 Jordanians underwent PCR testing, with a positive result recorded at & nbsp; 4.17%.

According to statistics, the total number of infected people in the kingdom since March 10 reached 312,043, while the number of deaths was 4,107, 294,802 recovered from the infection person.

Russia and China will develop cooperation in the forest industry 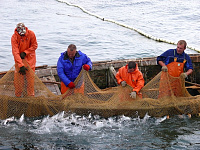 Within the framework of the WEF, the development of the fishing industry in the Far East will be discussed

Private traders may be allowed to collect gold, but only in Magadan

Jack Ma steps down as CEO of Alibaba