Agreements worth almost 82 billion rubles have been signed at the Krasnoyarsk Economic Forum, Sergey Vereshchagin, Deputy Chairman of the Government of the Krasnoyarsk Territory, told reporters on Friday.

“37 agreements were signed on sides of the forum this year. The total investment under these agreements is about 82 billion rubles  , said Sergey Vereshchagin.

He specified that two agreements became the largest in terms of investment: for the construction of a logistics center and the development of the Novoostrovsky microdistrict in Krasnoyarsk.

Sergey Vereshchagin also said that the forum was attended by representatives of 23 countries, more than 400 people. More than 100 events took place. The forum was held in hybrid format offline and online. The organizers recorded more than 1.5 million views of the broadcasts of the events.

The Krasnoyarsk Economic Forum -2022 was held on March 2-4. The main platform was the Siberian Federal University, and the main theme Siberia: the economy of the future. TASS acted as the forum's general media partner. The Krasnoyarsk Economic Forum was held for the first time in 2004; it gathered then about 700 participants. Over the years, the forum has been devoted to the development of the East of Russia, a long-term strategy for economic development, the industrialization of the economy, and new points of growth.

Russian fuel for the Philippines, Chinese cars - No. 1 in Russia, the second branch of BAM, the excise tax on soda in Thailand – see "News of Greater Asia" (issue 804)

A new car ferry service may appear on Sakhalin

Roscongress published the program of business events of the Youth EEF 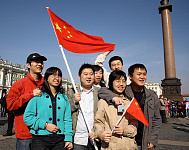