According to the head of the holding Oleg Belozerov, they will increase the capacity in the eastern direction.

The Russian Railways Holding Company (RZD) has completed the modernization of the Andrianovskaya and Kamyshet stations at the Eastern Landfill, the head of Russian Railways saidOleg Belozerov in the framework of the event dedicated to the Railway Worker's Day. The reconstructed stations will increase the capacity in the eastern direction.

"We are fulfilling the tasks set by the President of the Russian Federation. For every holiday, new facilities are opened here, and not only for holidays. At the moment, the timely or advanced construction of the Eastern Landfill is crucial for us. And by this holiday, we have opened two very significant facilities — the Andrianovskaya station and the Kamyshet station, which will increase the capacity of the Eastern Polygon," he said.

The Russian Railways added that due to the new tracing at the Andrianovskaya station, infrastructure restrictions on the passage of heavy trains have been lifted. Thanks to this, the station now accepts and sends trains with a length of more than 71 cars.

The first stage of modernization has been completed at the Kamyshet station, the holding explained. Due to the bending of the track, freight trains were forced to slow down, so it was decided to straighten this section. Thanks to the modernization of the Kamyshet station, the capacity on the Alzamai — Nizhneudinsk section has increased to 90 pairs of trains per day, and the speed of trains has increased from 40 to 80 km/h. Traffic on the site has already been launched, the holding added.

"We strictly fulfill the figures for transportation on the Eastern polygon. And the presidential decree to ensure the volume of transportation of 180 million tons of cargo in the Eastern direction by 2024 will be fulfilled. At the same time, we do not forget about other directions: the northwest and the Azov-Black Sea basin," he addedOleg Belozerov.

Russian Railways plans to modernize 25 stations by 2024, build 26 and reconstruct 6 sidings, and it is also planned to lay about 1.4 thousand km of additional main tracks. Part of the reconstruction projects is aimed at increasing the capacity of railways.
Russia Russian Railways reconstruction station TASS
|
Facebook
|
Twitter
|
VKontakte
|
Odnoklassniki 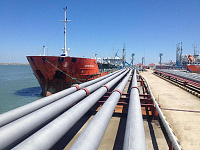 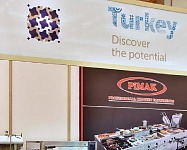 Exhibition of Turkish goods was held in Turkmenistan

Mi helicopters will be assembled in Alma-Ata

The authorities of Kazakhstan shared their expectations from the Chinese EXPO

The head of Yakutia presented the largest transport projects at SPIEF