The flight took place at an altitude of 500 m and lasted about 25 minutes.

The first flight of the Baikal aircraft, which is to replace the Soviet-designed An-2 "maize" planes, took place in Yekaterinburg, the head of the Ministry of Industry and Trade of the Russian Federation Denis Manturov told reporters.

“Light multi-purpose aircraft LMS- 901 Baikal made its first flight,” said Denis Manturov. The aircraft was developed by the Baikal-Engineering company under a contract with the Ministry of Industry and Trade for local airlines and is intended to replace the An-2 aircraft (“maize”) in operation.

The aircraft took off from the airfield in Yekaterinburg, the flight took place at an altitude of 500 meters and lasted about 25 minutes. In accordance with the flight assignment, test pilot 1st class Valentin Lavrentievperformed maneuvers to test the stability and controllability of the aircraft in the air. “The mission has been completed in full. The aircraft's systems were operating normally,” said Valentin Lavrentiev, quoted by the press service of the Ministry of Industry and Trade.

On February 9-10, Baikal will be shown in Moscow at the ninth National Exhibition and Infrastructure Forum of civil aviation NAIS 2022, notes the Ministry of Industry and Trade.

“Baikal takes into account existing developments, as well as the wishes of the regions and operators. This project will revive transportation on local airlines, solve problems with ensuring transport accessibility, primarily in the Far East,” the head of the Ministry of Industry and Trade noted.

According to the chief designerVadim Demin, aircraft speed - up to 300 km / h, its maximum range will reach 3 thousand km (with a payload of 2 tons - 1.5 thousand km).

Previously, Denis Manturov said that the serial production of a nine-seater aircraft should begin in 2023. The Ural Civil Aviation Plant (UZGA) expects to conclude a firm contract this year for the supply of ten Baikal aircraft in 2023-2025, UZGA Sales and Marketing Director Oleg Bogomolov told TASS in the summer.

He clarified that the company had negotiated with one of the largest leasing companies in the Russian Federation, it is a contract for 10 aircraft, which determines the delivery schedule in 2023-2025. Contracts for the supply of aircraft to Kazakhstan may also be signed in late 2021 - early 2022, Oleg Bogomolov said.

According to him, the cost of Baikal in the basic version is 120 million rubles. The size of the Russian state order market for Baikal aircraft may reach 300 aircraft by 2030, he noted. . Baikal will be equipped with a domestic VK-800 engine. This aircraft is being created to increase the transport accessibility of remote regions of Russia and the development of local airlines, it is able to operate in the conditions of a poorly developed airfield infrastructure. In addition to passenger transportation, Baikal will be able to transport cargo, carry out flights in the interests of air ambulance, patrol and monitor, be used in aerial forest protection and aerial agricultural work.
Russia plane Baikal flight TASS
|
Facebook
|
Twitter
|
VKontakte
|
Odnoklassniki 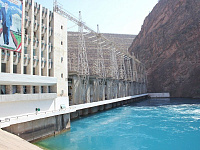 Nurek HPP is being upgraded

Special benefits for business will be introduced in the Kuril Islands

Iran to set up assembly of Peugeot Pars in Azerbaijan

In Dagestan, the scientific center of viticulture will return to work

Silk products and an exhibition of technology: a presentation of the economic potential of the city of Chengdu was held in Moscow