Russia will start supplying beef to Turkey in 2019

Lamb and goat meat are already exported to Iran.

The head of the Russian Ministry of Agriculture, Dmitry Patrushev, said that deliveries of Russian beef to the Turkish market will begin this year. This is reported by TASS.

expand. For example, the Ministry of Agriculture expects that deliveries of domestic beef will begin this year,” the minister said at the Russian Investment Forum, which is taking place in Sochi.

He noted that Russia is actively conquering the Turkish market. Thus, in 2018, the export of agro-industrial products to this country increased by 7% and reached $1.9 billion.

At the same time, Dmitry Patrushev stressed that in terms of agricultural exports, Russia pays great attention to the Middle East markets. He cited Iran as an example.

In 2018, the agricultural trade turnover between the Russian Federation and the Islamic Republic of Iran increased one and a half times and amounted to about $1.2 billion. sunflower oil, lamb and goat meat.

"Trilateral agreement on supply of wheat to the Iranian market,, which was signed by Russia, Kazakhstan and Iran this week, may be another step towards the development of relations between our country and Tehran,” D. Patrushev added.
< br>
Asia News Russia Turkey Iran Kazakhstan Sochi beef export Ministry of Agriculture of the Russian Federation Dmitry Patrushev Russian Investment Forum
|
Facebook
|
Twitter
|
VKontakte
|
Odnoklassniki

Kuwait provided a loan to Tajikistan for road repairs

Iran and Russia are going to unite electric networks through Azerbaijan

Export of Turkmen tomatoes to Russia continues to grow

Tehran and Moscow to agree on swap gas supplies 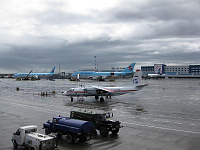 Commercial flights between Kamchatka and Chukotka have been opened