Russia stands for increasing trade, economic, scientific, technical, cultural and humanitarian cooperation with Saudi Arabia. Russian Prime Minister Mikhail Mishustin wrote about this in a congratulatory telegram to Saudi Crown Prince Mohammed bin Salman Al Saud on the occasion of the latter's appointment as head of the Cabinet of Ministers of the kingdom.

"I am convinced that your activities at the head of the government will contribute to the further development of traditionally friendly and partnership Russian-Saudi relations. I confirm my readiness for constructive joint work in order to increase trade, economic, scientific, technical, cultural and humanitarian cooperation. This fully meets the interests of the Russian Federation and The Kingdom of Saudi Arabia," reads the telegram, the text of which was published on Wednesday on the website of the Government of the Russian Federation.

On Tuesday, the Al-Arabiya TV channel reported that the King of Saudi Arabia, Salman bin Abdulaziz Al Saud, appointed the Crown Prince as Prime Minister. At the same time, the decree of the monarch emphasizes that government meetings at which the king is personally present will be held under his (the King's) chairmanship.

Also, by decree of the Saudi king, Khaled bin Salman bin Abdulaziz was appointed Minister of Defense of the country.

Prior to these appointments, the King himself headed the Cabinet of Ministers, and the Crown Prince was the first Deputy Prime Minister and Defense Minister of Saudi Arabia.

Uzbek Internet will be extended with Japanese money 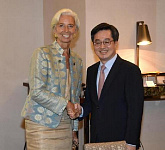 Russia and Iraq resumed direct flights after a 13-year break