President of the Republic of Maldives opens borders for tourists

The tourist season for foreign guests starts on July 15. The President of the Republic of Maldives, Ibrahim Mohamed Solih, announced this during his press conference.

The head of state said that the authorities managed to achieve positive results in the fight to contain the spread of the virus in the country, and now the government is ready to begin a phased easing of previously imposed restrictions, informs the resource https://en.sun.mv

The President thanked the citizens of the Maldives for observing the restrictive measures introduced to prevent the spread of a dangerous disease, and noted that the residents of Male, the capital of the republic, spent their houses for 42 days, including the holy month of Ramadan. With a population of over 100,000 and a density of nearly 20,000 per square kilometer, Male is one of the most densely populated cities in the world, making it particularly important for the government to keep the virus out of the streets.
< br> “It has been a tough 42 days during which entire families, including young children and elderly parents, have been forced to stay in their homes. This is a great sacrifice of individual citizens for the sake of the security of the whole society. I express my sincere gratitude to the beloved people of the Maldives,” said Ibrahim Mohamed Solih.

The President also expressed gratitude to the government of India for helping the country in difficult times and, answering a journalist’s question, clarified that it consisted in the supply of medicines , food and financial support.

Ibrahim Mohamed Solih said that the Government of India has allowed 37 Maldivian citizens undergoing cancer treatment to travel to India for medical purposes, although the borders of the two states are still closed for now. . 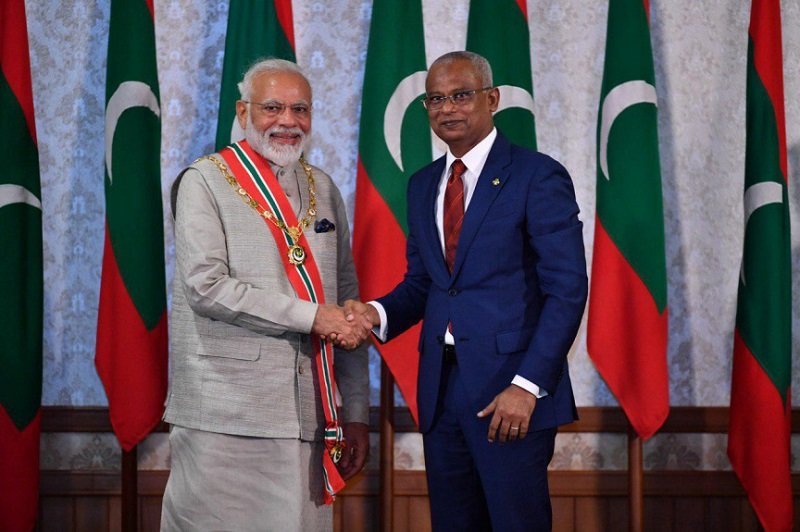 
The Maldives also received support from China, India's regional rival. The Chinese government provided personal protective equipment and coronavirus testing kits, and agreed to cut loan payments. Chinese tourism is very important for the Maldives and has been rapidly gaining momentum in recent years. Attracting Chinese tourists began in 2013, and in 2019, China provided the largest influx of tourists to the Maldives, 280 thousand people, overtaking India and Italy in the top three.

the situation in which the Maldives found themselves due to the coronavirus pandemic hit the population extremely hard and led to almost complete paralysis of the economy, and with the cessation of the resorts, it exacerbated the problem of living and earning for many migrants, who are mostly from Bangladesh and the Southeast Asia and whose number is approaching 100 thousand people.

The first case coronavirus in the Maldives was detected on March 7, a state of emergency was declared on March 11, and visas were stopped and borders closed on March 27.

Initially, cases of the disease were found in resort areas, but already on April 15 in Male tes t gave the first positive result. Currently, the Maldives plans to increase the number of tests carried out to 3,000 per day.

At the end of May, the country already saw a decrease in daily incidence statistics. At the moment, 2217 confirmed cases of infection have been registered, of which 1813 patients have recovered, 8 have died as a result of complications. The recovery rate is 82%.

Artek ice cream will be sold in China and Israel

ICAO to inspect the air fleet of Kyrgyzstan

India wants to acquire a number of industrial enterprises in Kazakhstan

China will use strong housing demand to stabilize economic growth