In the Far East, they are successfully fighting the accumulation of waste

"With almost all regions of the Far Eastern Federal District, the REO approved roadmaps for the implementation of projects to create solid municipal waste management facilities. The total amount of investments is estimated at 62.7 billion rubles," the words of the CEO of REO Denis Butsaev are quoted in the message.

He noted that the approximate capacity of all facilities will be 2.7 million tons, 1 million tons of them will be used for recycling.

Butsaev added that the Far Eastern Federal District is characterized by the lowest volume of waste accumulation. Currently, all regions have switched to a new waste management system. There are 41 regional operators operating there.

The domestic metallurgical industry will master the Asian markets

A network of solar power plants will be built in Kalmykia

Kazakhstan will increase the export of agricultural goods to Turkmenistan

"At the Red Bridge" in St. Petersburg will be held "Qatari Days" 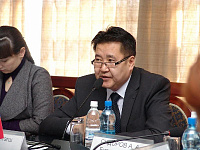