According to the head of the republic, Sergei Tsydenov, one of the largest railway operators for the transportation of oil and gas and petrochemical cargoes "is considering the possibility of registering with us."

The Moscow company SG-trans is one of the leaders in terms of the number of specialized wagon fleet for the transportation of liquefied hydrocarbon gases - it manages more than 17 thousand wagons. In the ranking of the largest railway operators of the Russian Federation in terms of the number of rolling stock managed by JSC SG-trans, it ranks eleventh with a fleet of more than 25 thousand cars.

Tsydenov noted that the government of Buryatia is working to attract large companies to the region and offers them investment projects in various fields. “Among the advantages of Buryatia are proximity to Mongolia, China, good logistics for accessing Far Eastern ports, as well as good transport capacity,” the head of the region explained.

Earlier it was reported that at the Russian Investment Forum in Sochi, the authorities of the region entered into an agreement with the group of companies (GC) Novotrans, one of the largest operators of railway rolling stock in the Russian Federation and CIS. The Group of Companies will create an enterprise in Buryatia to develop promising deposits of coal and ore.

Thus, in 2018 Novotrans will become a tax resident of Buryatia. “Now all the papers are being processed, we are waiting for the procedure to end in March, and from March we will start receiving taxes from them to our budget,” Tsydenov said.

Kavminvody-Sochi highway project is of interest to UAE investors

Panda gold coins to be issued in China 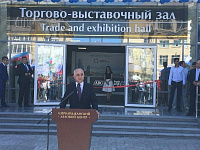 Iran and Azerbaijan will jointly enter the markets of third countries

Over the year, Kyrgyzstan supplied fruits and vegetables to the EAEU for $157 million