Kazakh companies are discussing with Toyota the possibility of transferring its production from Russia.

Kazakh companies are discussing with Toyota the possibility of transferring its production from Of Russia.

Kazakh automakers are discussing with the Japanese company Toyota the possibility of opening an assembly plant for its cars in the republic after the closure of production in Of Russia. This was announced at a briefing on Tuesday by the Minister of Industry and Infrastructure Development of Kazakhstan Kairbek Uskenbayev.

"Toyota is one of the most popular brands in our country. Our manufacturers are negotiating. I do not know if it will work out or not. But if Toyota opens, it will be one of the biggest successes of the country," he said.

In January, the flow of tourists from Russia to Turkey exceeded the pre-pandemic figure

Work on the removal of fragments of the carrier rocket "Soyuz-2.1a" in the Amur region has been completed 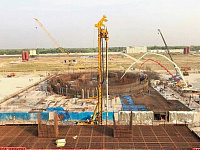 Rooppur NPP will install a power unit of the latest generation

Russian-Chinese business forum to be held in Moscow

Sergey Cheremin: “We have grandiose plans for cooperation with the city of Nur-Sultan”