Kirill Babayev, Head of the Institute of China and Modern Asia of the Russian Academy of Sciences, will moderate the session "The Role of the SCO in a Changing World", which will be held on September 6 as part of the Eastern Economic Forum.

The Eastern Economic Forum is a key international platform for creating and strengthening international cooperation in the Asia–Pacific region. The Forum's events are traditionally held in the format of panel sessions, round tables, TV debates, business breakfasts and business dialogues dedicated to Russia's relations with various countries of the world. This year, one of the sessions will be dedicated to the SCO and will be held with the assistance of the ICSA RAS.

In sharply changing geopolitical circumstances, the role of the Shanghai Cooperation Organization will increase, contributing to the stabilization of the situation in the areas of both security and economic development. Thus, in September 2022, the next summit of the Council of Heads of SCO Member States will be held in Samarkand, at which it is planned to consider the state and prospects for further development of multilateral cooperation, to determine priorities and practical measures to increase the SCO's activities at the present stage. Special attention will be paid to increasing the role of the organization in world affairs in the light of new geopolitical realities. During the session, it is planned to discuss the most pressing and significant topics related to the development of the SCO in the new geopolitical realities.

Samsung will increase the zoom with the help of Corephotonics 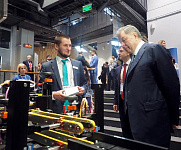 Russia and the UAE decided to hold an industrial forum

Chinese investment in Thailand is on the rise

A business forum is being held in Chukotka