The Far East may become a territory of advanced development

The entire Far East can become a TOP.

The entire Far East can be made a single territory of advanced development (TOP). As Deputy Prime Minister - Presidential Envoy to the Far Eastern Federal District Yuri Trutnev told reporters on Thursday, the corresponding proposal was supported by Prime Minister Mikhail Mishustin.

The territories of advanced development are designed to stimulate priority sectors of the economy and attract new investors, contributing to the growth of the well-being of the residents of the region. Residents of the TOP have access to a wide range of benefits and preferences, including reduced tax rates, insurance premiums, as well as a number of simplified administrative procedures. 20 such territories have been created in the Far East, Deputy Prime Minister - Presidential Envoy to the Far Eastern Federal District Yuri Trutnev announced the idea of developing a similar preferential zone of a cross—border format in early June. Bolshoy Ussuriysky Island in the Khabarovsk Territory is considered as one of the pilot sites.
Russia the Far East the territory of advanced development TASS
|
Facebook
|
Twitter
|
VKontakte
|
Odnoklassniki

Entire city-workshops of the future have been created in China

Following the results of the Russian-Turkmen negotiations, eight documents were signed

An oil and gas industrial park will be built on Sakhalin

China is serious about the development of the northeast

Singapore and Malaysia to launch stock exchange interconnection program in 2018

Iraqi farmers save crops thanks to irrigation pump 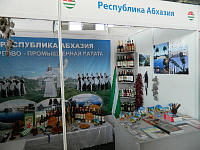 The Far East may become a territory of advanced development