CGTN told about domestic Russian brands that have replaced foreign ones

After the start of the special operation in Ukraine, many companies from Western countries announced the suspension of work or withdrawal from Russia, which, on the one hand, shook the Russian markets of public catering, clothing and accessories, cosmetics, printed press, but on the other, promised enterprising businessmen of Russia unique chances to expand their market share.

The pavilions of the Yekaterinburg EXPO Center have collected all the best that is produced and grows in the fields of the Federal District and beyond.

Developments, results of breeding work and new technologies in food production are presented by research institutes. This part of the exhibition is designed more for those who are directly engaged in agriculture or manufacturing.

"Together with the Research Institute of Agriculture of the Crimea, we have developed a technology for infrared drying of fruits, vegetables and berries, which today we will also present as eco-chips, because they are grown in our experimental farm without the use of pesticides," said Mikhail Karpukhin, Vice–Rector for Research and Innovation of the Ural State Agrarian University (USAU).

Each region has its own stand-residence and its own pool of enterprises and farms.

Most of the territory of the Yamalo-Nenets Autonomous Okrug is located outside the Arctic Circle, and it would seem that there is hardly anything else that can be developed in such harsh climatic conditions, except reindeer husbandry and fishing. But many truly unique products were presented at the official stand of the region, which allowed attracting more and more visitors here since the opening of the exhibition.

Here you can try, for example, tea grown in Yamal with northern berries and herbs.

"Yamal ivan tea, cloudberry, lingonberry, blueberry, yagel is our novelty, which we have released this year," said Natalia Kotlyarova, representative of the first Yamal tea manufactory.

Traditional industries and crafts have hardly felt the impact of Western sanctions on themselves. But everyone else has to adapt to new conditions and look for solutions. Dairy producers simplify packaging. Enterprises engaged in the manufacture of equipment and equipment for animal husbandry are looking for new partners and contractors for the supply of high–quality components in Asian countries.

"Some of our components come from China. Already in February, for obvious reasons, we opened an additional office in Blagoveshchensk," said Yuri Timofeev, Head of Timofeev+.

Import substitution and food security are also discussed at a meeting of the heads of the regions belonging to the Ural Federal District. It is conducted by the plenipotentiary representative of the President Vladimir Yakushev.

"The number of combine harvesters and tractors today of imported production in the territory of the Ural Federal District is only 8%. But it is also not a principled position, I think we can replace it with domestic-made equipment. We have a large number of agricultural grain producers working for export. Today, due to the preservation of our internal security, food exports are limited. But nevertheless, the price today is not bad, so I am sure that everyone will reorient to the domestic market," said Vladimir Yakushev, plenipotentiary representative of the President of the Russian Federation in the Ural Federal District.

He also called on regional farmers to turn to the Soviet experience and increase the production of berries and apples for domestic consumption, rather than buying them abroad. Agricultural production and animal husbandry are now actively subsidized throughout the Urals.

Only in the Sverdlovsk region this year more than 4 billion rubles were allocated for these purposes.

Huawei will launch its own operating system HarmonyOS in June

Alexey Kudrin found 50 billion rubles of misappropriation of the budget

Chinese CEFC and Rosneft will create a joint investment fund

Nissan to start testing robot taxis in Japan in March 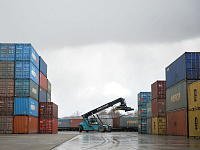 Asian companies will come to Siberia