A yacht for a multimillionaire from Israel was built in Turkey

A 50-meter vessel for Ron Zuckerman was launched from the Bodrum shipyard.

The solemn ceremony was attended by both shipbuilders and heroes of the occasion - Ron with his wife Michaela Bercu and son Itai.

The ship has 11 cabins for 12 passengers and 10 crew members. “We presented this type of yacht at an exhibition in Monaco, where she won a prize and received an award last year,” said shipyard owner Vedat Semiz.

He also added that thanks to Ron Zuckerman, after the construction of his 50-meter vessel, a 60-meter yacht will be created.

Earlier it was reported that light luxury vessels for successful businessmen from all over the world. The project has been implemented since 1989, when a free economic zone was created in the Konyaalti region.

This year it is planned to build 25 pleasure yachts, the income from the project will be $150 million.

A priority development area will be created in the South Kuriles

Turkey can turn into an energy hub of Europe

International conference "Investment in Kyrgyzstan" was held in Beijing

China is developing the One Belt, One Road project

Rosneft opened a research and development center in Qatar 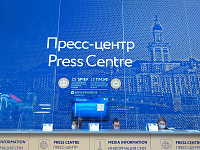