From September 9 to 11, the VI Caspian Media Forum was held in Astrakhan. The main media event of the Caspian region gathered more than 300 delegates.

The event was organized by the Government of the Astrakhan Region, a partner of the Eurasian Peoples’ Assembly, the Association “Center for International and Socio-Political Research “Caspian-Eurasia” and the Political Science Center “North-South” with the support of Rossotrudnichestvo and Rostourism. The project is being implemented with the support of the Interstate Fund for Humanitarian Cooperation of the CIS member states.

The high level of the VI Caspian Media Forum this year was confirmed by a large number of diplomats, government officials and leaders of major media from the Caspian countries. For the sixth time, the forum is being held in the Astrakhan region, a region that was not in vain chosen as its venue, since it is Russia's southern outpost in the Caspian Sea, and is also historically the intersection of the leading trade and transport routes between the states of the Caspian Sea. Plenipotentiary Representative of the President of the Russian Federation in the Southern Federal District Vladimir Ustinov also said this in a solemn speech to the forum participants, emphasizing the relevance of the chosen topic:

“One of the promising areas of cooperation is tourism . The resorts of the Caspian Sea receive more than 1 million tourists annually. But we certainly need a joint tourism infrastructure. Development of the tourism cluster, information support for tourism projects. Therefore, it is necessary to further develop the strategy of the Caspian region as a single economic and humanitarian, educational, information space, designed to ensure active integration processes. I believe that the VI Caspian Media Forum can make a significant contribution to the implementation of this idea.”

“Cooperation in the Caspian is reaching a new level. The legal framework is being improved. In August 2018, the leaders of the "five" signed the Convention on the Legal Status of the Caspian Sea. Dialogue is being promoted within the framework of five-party formats and mechanisms. Interaction in the information sphere contributes to the deepening of trust and mutual understanding. I am convinced that the current forum, dedicated to such a topical topic as "Tourism and ethno-cultural communications in the media space", will be held in a constructive, businesslike manner, and will contribute to the development of new joint initiatives," the report says.

The high potential and broad prospects of the Caspian countries were noted by representatives of all foreign delegations who arrived at the forum. Governor of the Astrakhan region Igor Babushkin emphasized that tourism in the Caspian Sea can and should become the leading sector of the economy:

“Cruise tourism can become an attractive destination. Many people are well aware of the famous cruises along the Volga, popular in the Soviet years. About 12 thousand tourists from different cities of Russia arrive in Astrakhan annually. Therefore, we want to further develop cruise shipping, not limited to regional routes. Moreover, the convenient location of the region creates opportunities for trans-Caspian travel.”

The head of the region also recalled the imminent launching of the Peter the Great cruise liner, ready for international routes in the Caspian Sea, as well as the creation of a Caspian cultural and educational cluster on the territory of the region.

“The development of tourism in the Caspian can be viewed from two points of view. On the one hand, in terms of income. But there is another aspect - you can use it as a dialogue between our countries. And we need to get more knowledge about each other. Since we are in a common civilizational and cultural space,” Kazem Jalali, Ambassador Extraordinary and Plenipotentiary of the Islamic Republic of Iran to Russia, agreed with his colleagues.

According to Ermek Kosherbaev, Ambassador Extraordinary and Plenipotentiary of the Republic of Kazakhstan to the Russian Federation, Russia has been and remains a key trade and economic partner of Kazakhstan in various areas: trade, industry, culture , tourism, medicine.

“Bilateral turnover between our countries amounted to almost 11 billion dollars. This is 27% higher than last year. This year we can reach a record figure of $23 billion. Among the promising areas, one can also note the creation of a Border Trade Center in Astrakhan, attracting shipbuilding orders from Kazakhstan, the work of the Special Economic Zone and the North-South transport corridor, said Yermek Kosherbayev.

Mr. Ambassador also stressed that in the Astrakhan region great attention is paid to the development of peace and harmony between ethnic groups and nations: “Kazakhs are the largest ethnic community in the region. We are grateful to the leadership of the region for supporting the Astrakhan Kazakhs, in particular for strengthening spiritual ties, preserving the language and culture of their ancestors, perpetuating the memory of the great sons and daughters of the Kazakh people.”

Kenan Guluzade, adviser to the chairman of the State Tourism Agency of the Republic of Azerbaijan, also cited statistical data in the field of tourism in the Caspian Sea: “Over the past 1.5 years, we have experienced a terrible crisis. Global tourism and tourism of our countries fell by 80%. This is the loss of jobs, the loss of investment. Here are the figures for 2019 and for the first months of 2021. In 2019, 932 thousand citizens visited Azerbaijan, this year - only 158 thousand. This has never happened to us before."

The consul of Turkmenistan in Astrakhan, Guych Garayev, within the framework of the VI Caspian Media Forum, read out the greeting address of the Ambassador Extraordinary and Plenipotentiary of Turkmenistan to Russia Batyr Niyazliev.

“The Caspian region and its potential are objectively becoming a priority. The media, their assessments, opinions and judgments are of paramount importance, they contribute to mutual understanding and the formation of a unified approach to joint strategic cooperation plans,” the official statement says.

According to the Consul, Turkmenistan attaches great importance to the development of tourism and strengthening of cultural values. In particular, an agreement on cooperation in the field of development of culture and tourism was signed with the neighboring states of the Caspian region.

Deputy Chairman of the Government of the Republic of Dagestan Muslim Telyakavov proposed to consider the idea of creating a single tourism platform and design code for the countries of the Caspian region: “As part of the national project for the development of domestic tourism, a set of measures is envisaged , including the creation of special digital platforms for tourists. The project of an interactive tourist map of the North Caucasus region is also being discussed. I think it is expedient to discuss the creation of such electronic products in the countries of the Caspian Sea. I consider it useful to increase the resources of advertising and information support.”

The head of Rossotrudnichestvo, Yevgeny Primakov, is also convinced that close work at the regional and municipal levels has a positive effect on the development of tourism, scientific, educational and cultural ties: “Rossotrudnichestvo is ready to continue provide vigorous support to the initiatives of the regions and constituent entities of the Russian Federation to expand international cooperation. I would like to address Astrakhan once again: "Welcome to the presentations of your region in the Russian Houses."

Vice-rector of the University of Journalism and Mass Communications of Uzbekistan Nozima Muratova told her colleagues about the delegation from the Republic of Uzbekistan.

“Our delegation, in addition to representatives of state institutions and non-governmental organizations, includes film crews of two TV channels - Dunyo Boylab and Uzreport TV. The first is a kind of niche channel that relies on educational programs. The second one is informational (by the way, its issues are very popular). Both broadcast throughout the country. On this trip, they not only cover the media forum itself, but also collect material for programs that will reveal the tourism potential and cultural heritage of the Astrakhan region. During the isolation due to the pandemic, people are very tired of everything negative and monotonous. In the meantime, all borders are not open and there is no opportunity to go anywhere, the audience creates high ratings for programs that are dedicated to travel and other cities and countries. Therefore, I think that programs about the Astrakhan region will also have a good audience in our country,” said the head of the Uzbek delegation.

Travel journalism, cultural codes, educational media are on the agenda of the VI Caspian Media Forum

Also on the main day of the forum - September 10 - participants were offered three discussion panels at once: "Travel journalism in the digital age", "Chek-in in the cultural media space" and "Educational media projects in the new system of information communications ".

Also the day before, on September 9, events within the framework of the youth program of Rossotrudnichestvo "New Generation" and a meeting of the Caspian School of Volunteering took place on the sidelines of the forum.

At the end of the forum, the organizers summed up the results of the competition for the best journalistic work "Caspian Without Borders". The Grand Prix of the competition was given to Asylbek Sitaliev, a local historian from Atyrau. 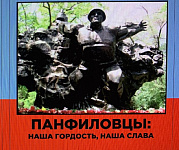 A book about Panfilov's heroes has been signed for publication

May 27 will be the Global Day of Russian Education