The new issue of the project "Great People of Greater Eurasia" is dedicated to the actor Georgy Millyar.

This time our media mentors dedicated it to the actor Georgy Millyar. Charming Baba Yaga and the terrible Koschey the Immortal. It seemed that he played all the "evil" power in the cinema. There is no person in the Eurasian space who would not know his fairy-tale characters. But few people know that this actor, who so talentedly played negative fairy-tale characters, had a noble origin.

He was born at the dawn of the twentieth century, in 1903, on November 7, on the day of the October Revolution. But he regretted that it did not happen on Bastille Day. French by birth, he really wanted to devote himself to the stage already in childhood. He took his first steps in amateur performance. And later, the great Meyerhold became his mentor in theatrical business. But the film director Alexander Row really revealed it. It was in his fairy tales that Georgy Millyar played all the evil characters. Although by and large they cannot be called evil, they turned out to be so charming.

Modest, always doubting, he knew how to say “thank you” for everything, at every turn of life, this was the phenomenon of Georgy Millyar, a man who until a very old age he remained a child in his soul.

Recall that the media project “Great people of Greater Eurasia” tells about the great people of different nationalities of the Eurasian continent. Its target audience is children, teachers, parents. The project is being implemented within the Humanitarian Project "Children of Eurasia" of the Eurasian Peoples' Assembly. 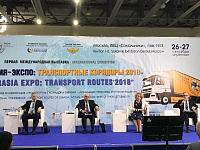 The Assembly invites to participate in the Orthodox dictation

The Assembly launches the online marathon "Symphony of Eurasian Languages"