From August 27 to September 5 in the Republic of Crimea and Sevastopol, the Eurasian Peoples' Assembly is the organizer of several international events at once, some of which are with online participation of representatives of the countries of the world.

Among the events are the V session of the International Public Forum on the Preservation of Historical Memory of the Second World War and the Great Patriotic War, an expanded meeting of the Presidium of the General Council of the Eurasian Peoples’ Assembly, the Week of Memory together with the Crimean Eurasian School of the Commonwealth, the XVI Sevastopol International Festival of Documentary Films and TV Programs and others, united under the auspices of the mega-project of the Eurasian Peoples' Assembly "We won together - in the name of peace and creation". 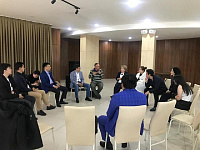 "Belts and Roads of Eurasia": the Kazakhstani stage of the cycling expedition ended