The signing ceremony took place at the Assembly's headquarters in Moscow. The document was signed by Secretary General of the Assembly Andrey Belyaninov and Chairman of the EAC Evgeny Kulikov.

The purpose of the Agreement is to expand international business cooperation and exchange accumulated experience and information. In particular, the development of a system of international professional educational institutions that contribute to improving the social and legal qualifications of labor migrants, as well as the creation of a civilizational professional labor market for migrants in the Eurasian space.

For reference
< b>
About the Eurasian Peoples' Assembly

International The Eurasian Association of Trade Unions and their Associations (EAP) provides its platform for everyone who wants to defend the rights of workers, who seeks to organize labor migrants in order to include them in the common trade union family, who is eager to stop the destruction of enterprises and the social security system. 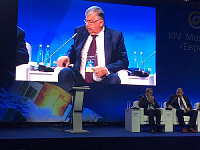 Svetlana Smirnova: The power of tourism is unique