On June 17, 2020, the Eurasian Peoples’ Assembly, the Eurasian Academy of Television and Radio and the Association of Researchers of the Russian Society (AIRO-XXI) held online the International Public Forum on Preserving the Memory of the Second World War and the Great Patriotic War as part of the Megaproject “WIN TOGETHER - in the name of peace and creation."

The topic of the forum is “To be worthy of the memory of the fallen”. The forum was attended by representatives of all 15 former republics of the Soviet Union. The International Public Forum was held for the fourth time. For the first time held within the framework of the XV Sevastopol International Film Festival "WIN TOGETHER" ">in May 2019 the forum was continued during the Days of the Eurasian Peoples' Assembly in Baku in October 2019, and in February 2020 it was held in Yalta, in the format of an international scientific conference "Yalta-1945: lessons of history". The initiative, born in Sevastopol, united the forum participants in a continuous dialogue and became an effective tool and a real platform for cooperation between representatives of the international community.

The purpose of the forums within the framework of the Megaproject /victorytogether75">"WIN TOGETHER - in the name of peace and creation" - drawing the attention of the general public to the issues of preserving historical memory, countering attempts to rehabilitate Nazism.

The forum "To be worthy of the memory of the fallen" lasted about two hours and was divided into three blocks. In the first block, the participants discussed the issue of how to resist attempts to destroy the common contribution of the Soviet peoples to the victory in the Great Patriotic War, what to do so that time really does not have power over sacred memory. The second block was dedicated to the upcoming Day of Memory and Sorrow, June 22, the day the Great Patriotic War began. The forum participants talked about how this day will be celebrated in different countries and regions. “Is it possible to preserve the real memory of the anti-Hitler coalition by lying, asserting the superiority of one country over other states, is it possible to preserve the unity of people, Europe, the world in this way?” - this question became the leitmotif of the third block of the forum.

The following people got in touch from the headquarters of the Eurasian Peoples' Assembly in Moscow:


The forum was attended by:


memory of peoples, supports the movement against the erosion of the value and semantic aspects of history, falsification of the results of the Second World War. In 2020, the Eurasian Peoples' Assembly will hold more than ten International public forums for preserving the memory of the Great Patriotic and World War II, including online.
Victory Victory75 We won together June 22 Day of memory and sorrow preservation of memory International public forum online meetings Eurasian Peoples' Assembly
|
Facebook
|
Twitter
|
VKontakte
|
Odnoklassniki 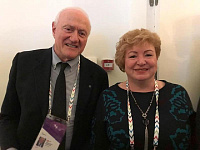