From September 5 to 8, representatives of the largest Eurasian media visited the Congress, organized on the initiative of the Eurasian Development Bank, in Almaty.

The first plenary session on the topic “EAEU - a new reality: the agenda for the coming years”, as well as the Conference as a whole, was opened by the Chairman of the Board of the EDB Andrey Yuryevich Belyaninov.

“The purpose of the Congress is to to make our organization known, - he told the participants and guests. -  Then - a lot of incompetent judgments about economic issues. Others do not understand this at all, but give advice!” 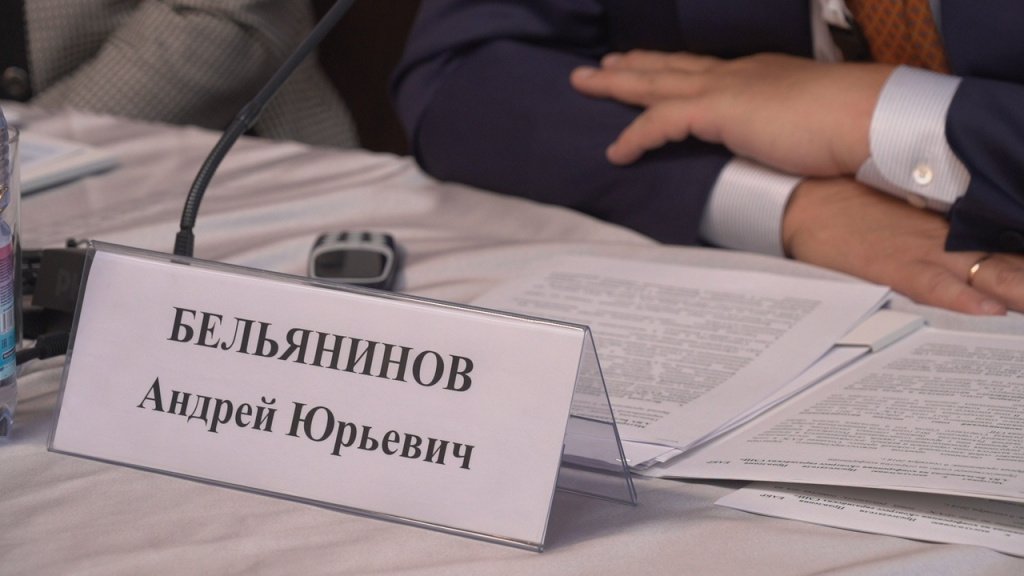 The EAEU is a new reality in the Eurasian space. The Union has managed to achieve a lot and is quite viable: the common market for goods is working, the common labor market is already really functioning - a great and often underestimated achievement. There is some progress in the development of common technical regulations. What needs to be done to achieve the maximum positive effect of the EAEU? What is the agenda for the coming years? These issues were discussed with the conference participants by the head of the Center for Integration Studies of the EDB Andrey Petrosyan, the director of the Integration Development Department of the Eurasian Economic Commission Sergey Shukhno, the director of the Center for Macroeconomic Research and Forecasting "Institute for Economic Research"< b>Sara Alpysbayeva, Director of the Research and Statistics Department of the National Bank of the Republic of Kazakhstan Vitaly Tutushkin and Russian economists - Mikhail Delyaginand Evgeny Nadorshin .

The participants expressed the opinion that the EDB could well become the center of new initiatives in the Eurasian space, the integrator of this activity. Journalists from the Bank's member countries were interested in specific projects in which the EDB participates. For example, in Kazakhstan - this is the construction of the third power unit of the Ekibastuz GRES-2, in Belarus - the construction of a small-section wire mill at the Belarusian Metallurgical Plant, in Russia - the construction of roads and much more. 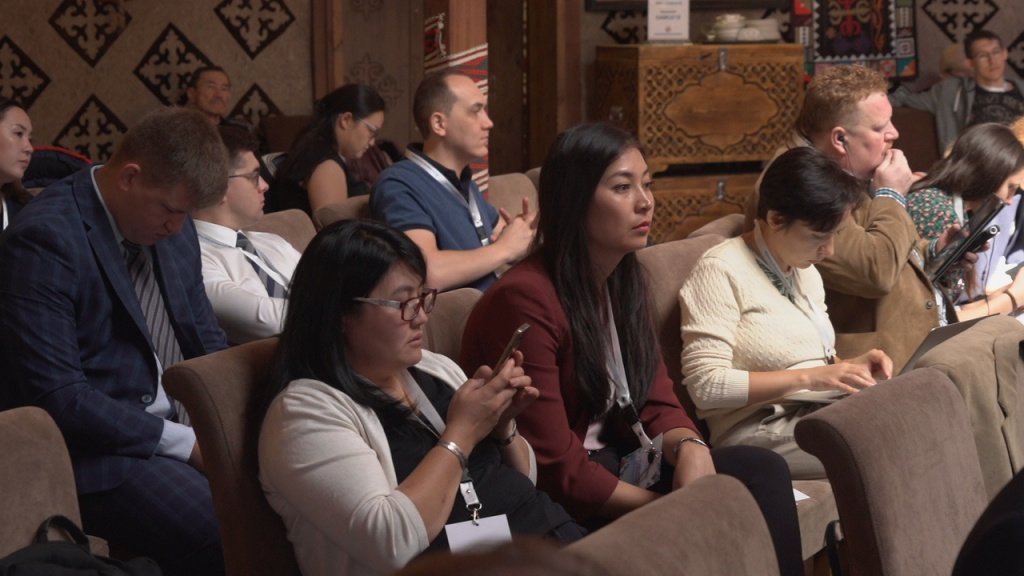 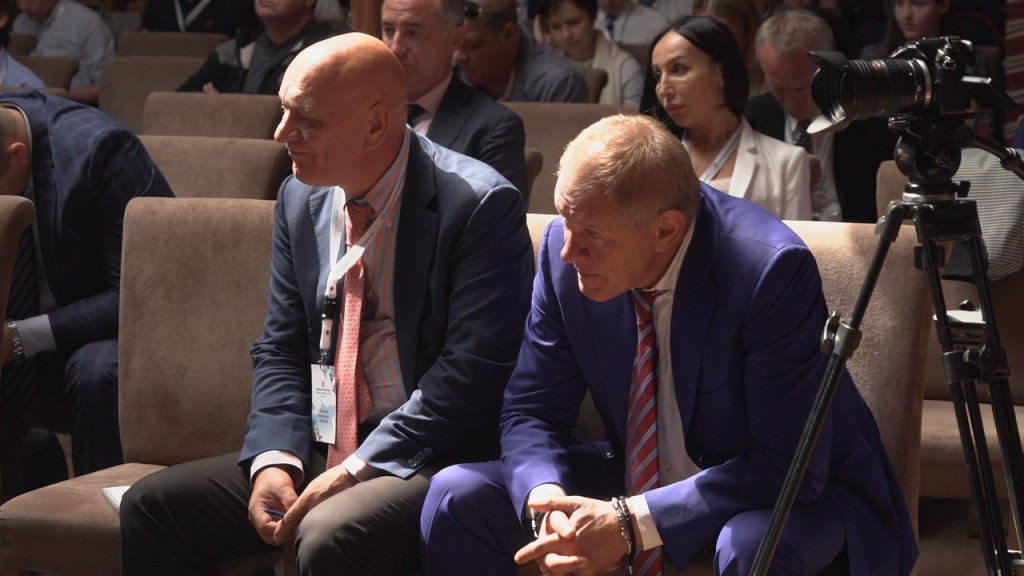 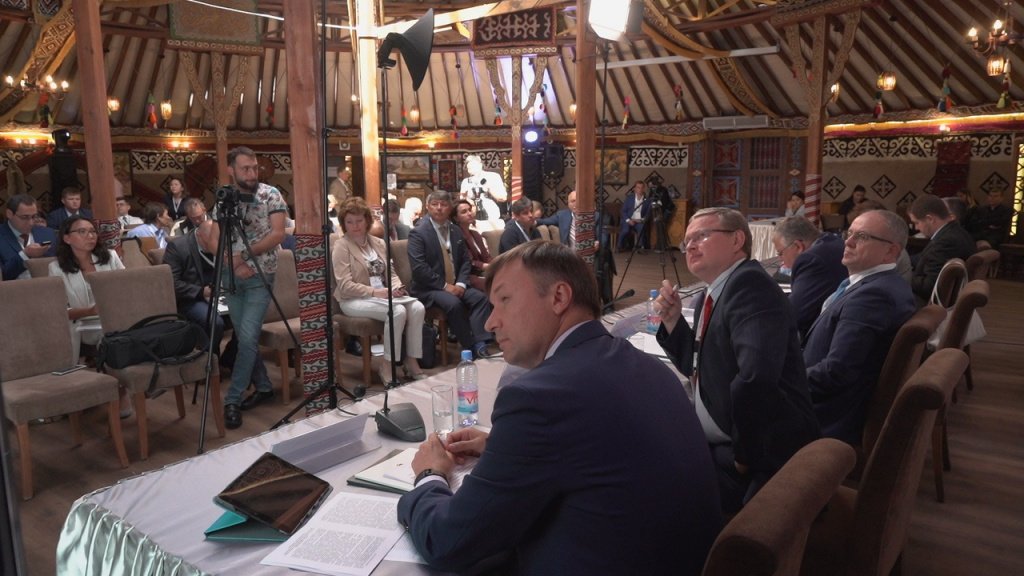 Eurasian Mass Media Congress continued Panel session: “The Eurasian Development Bank as a financial mechanism for the Eurasian Grace”, presented by the Head of the EDB Andrey Belyaninov and the leading specialists of the Bank Timur Abdullahanov, Vsevolod Smakovand Niyaz Orazov. The speakers said that the EDB offers new products that other banks have not yet mastered, and implements a mechanism for creating new projects under the obligation of each member country to repay the debt in case of failure. 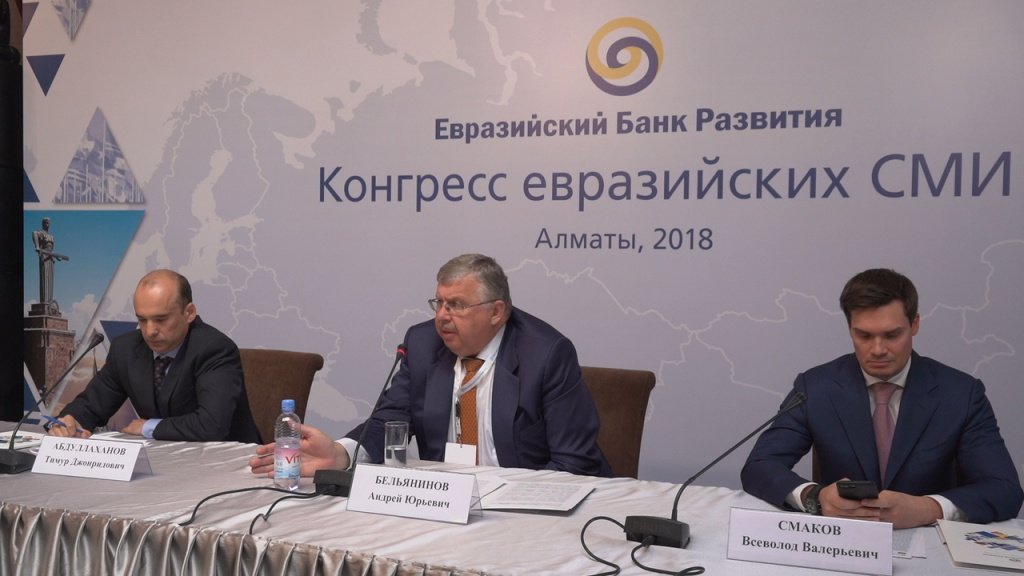 Next Congress participants took part in the discussion “General Issues and Various Requests for the Information Agenda of Integration in the Media of the EAEU Countries”, which was moderated by the Deputy Chairman of the Board of the EDB Andrey Krainiy. 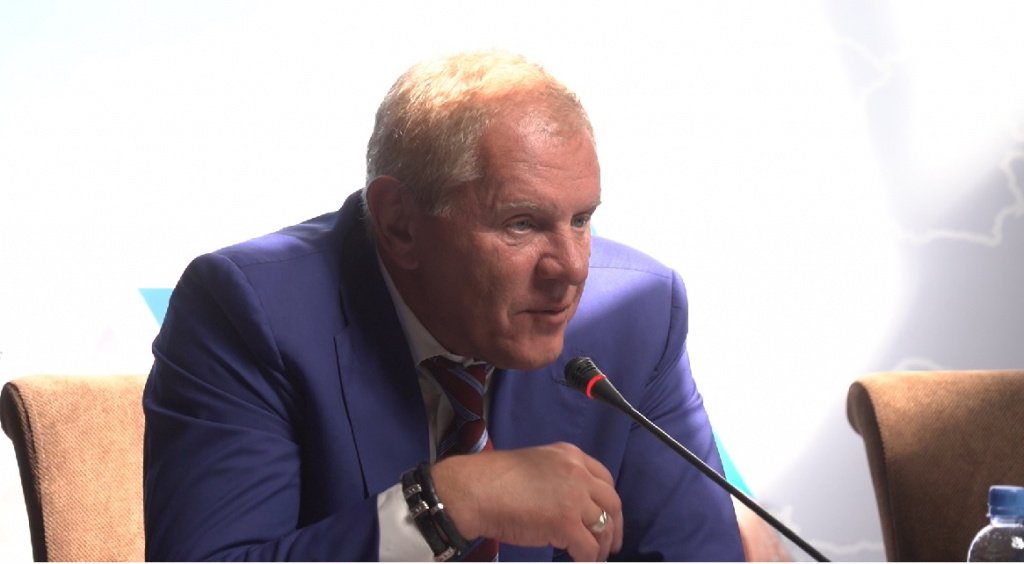 What are these queries when will be formed a single information field of the EAEU, how to find a topic in integration that will be of interest to everyone - about this and much more m argued Igor Zadorin (Executive Director of the International Research Agency "Eurasian Monitoring"), Ruslan Karataev ("Russia-24"), Eduard Poletaev ( President of the Public Foundation "Eurasia World"), Evgeny Preigerman (Head of the expert initiative "Minsk Dialogue"), political observerHayk Khalatyan and representative of the branch of the "Eurasians - New Wave" Foundation in the Kyrgyz Republic Denis Berdakov.

The discussion on this topic turned out to be especially close to representatives of the Eurasian media, so it became the most heated and lengthy. 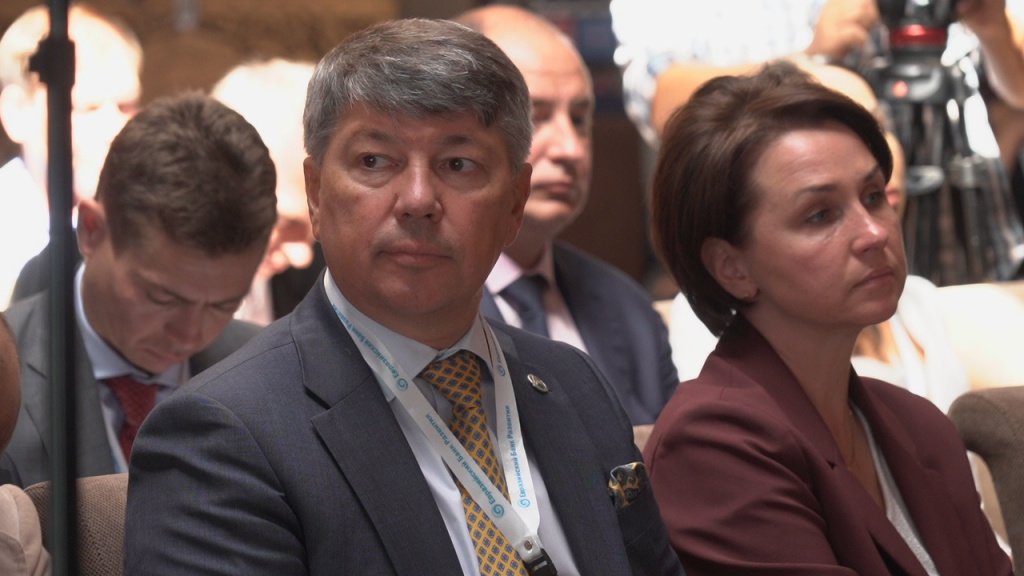 Ale xander Lebedev and Lyubov Yolkina, Head of the Media Center of the Eurasian Peoples’ Assembly

At the end of this discussion, the signing ceremony of the Partnership Agreement between the Eurasian Peoples’ Assembly and the Big Asia TV channel took place, the subject of which was information and business cooperation aimed at for the development of the strategic partnership of the Parties on the issues of Eurasian integration. The document was signed by the Secretary General of the Eurasian Peoples' Assembly Andrey Belyaninov and the General Director of the TV channel Alexander Lebedev. 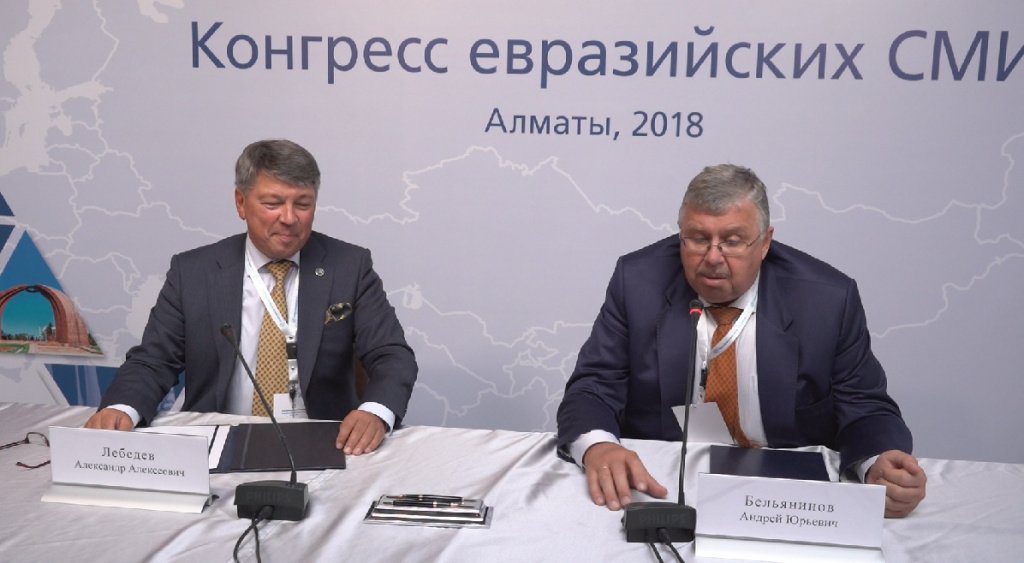 Year by year, the understanding comes that without the media, without the agenda that should be created not only within the media, but also in business, in politics, it is impossible to promote large infrastructure projects, Alexander Lebedev b>. - But the main thing is not even in projects - the main thing is in understanding that it is necessary to move from wars to creation. It is necessary to build not just a single space - informational, political ... It is necessary to achieve new elements of trust. When businesses start holding media congresses, it means that something has changed in the world. The Eurasian Peoples' Assembly is becoming one of the key players in the humanitarian space of Eurasia." 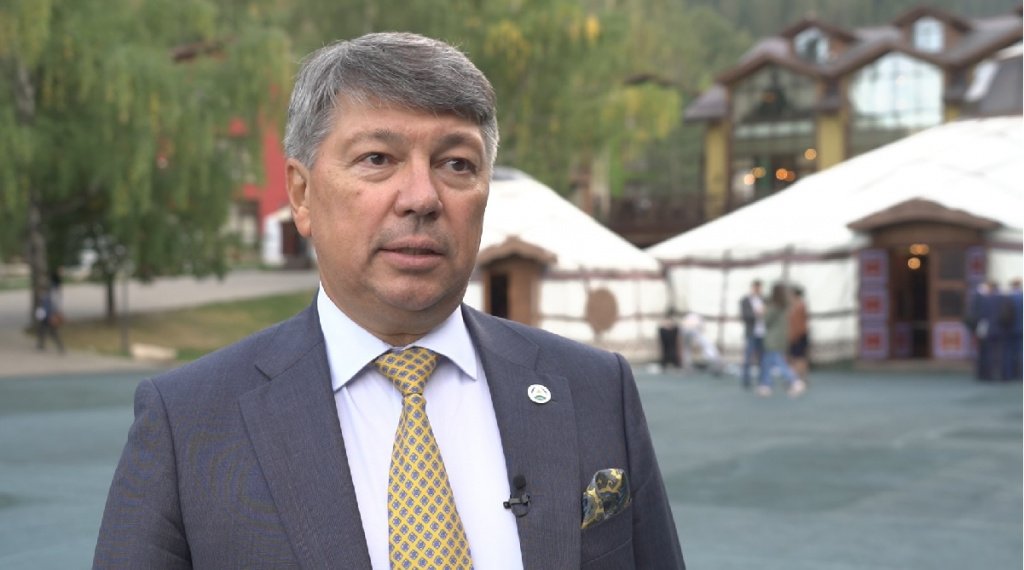 At the end of the official events of the Eurasian Media Congress, the head of the EDB Andrey Yuryevich Belyaninov gave an exclusive interview to the TV channel "Big Asia".  ;

“What would I like from today's event? So that they learn more about us, so that we are in demand, so that we correspond to what has just been said to you. I'm sure we can do it. We would very much like our wishes to correspond to the regulatory framework that would be in the work of the Governments of the founding countries of our Bank. It seems to me that our Bank deserves more attention and greater participation in the integration processes of our countries. To do this, of course, we must be more active. I think we need to meet again in six months and see what's going on, - Aandrey Belyaninov suggested. 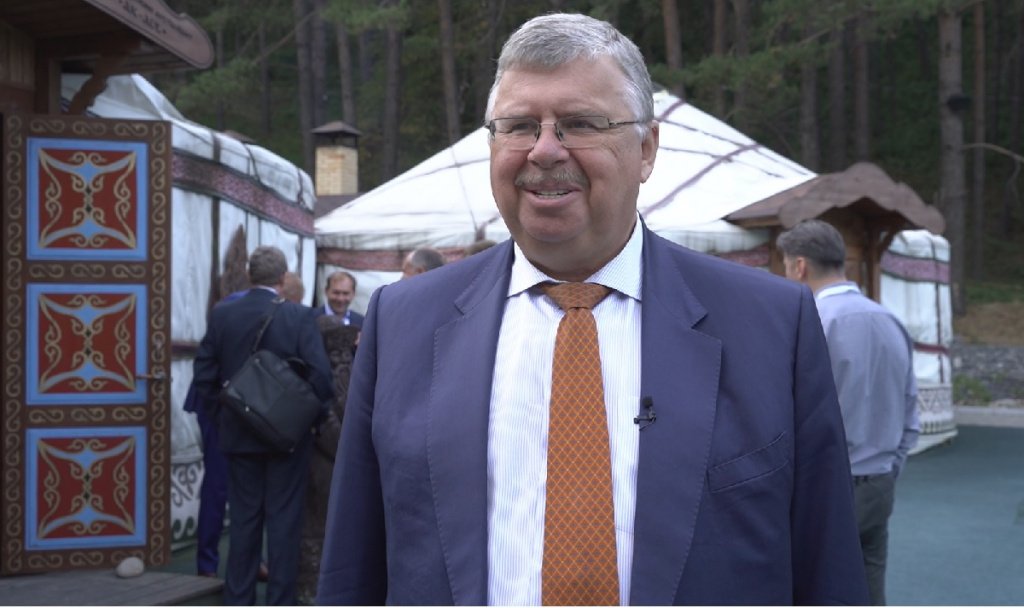 The organizers chose a mountain resort hotel as the venue < b>Lesnaya Skazka, located at an altitude of 1650 m above sea level.

The plenary sessions were held in the largest yurt in the world, listed in the Guinness Book of Records. The diameter of the yurt is 19 meters and 80 centimeters, up to 200 people feel comfortable inside. 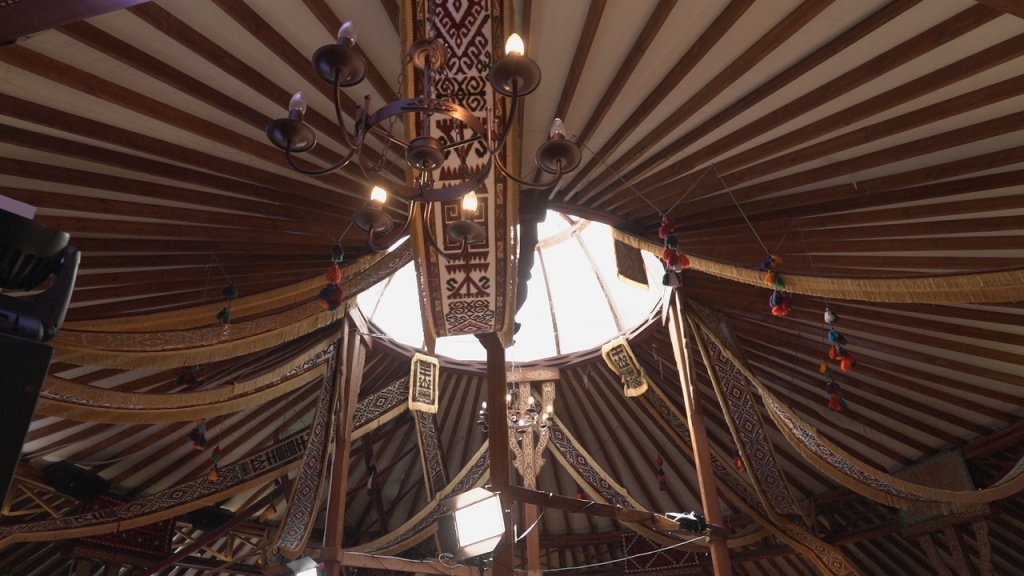 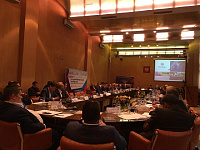 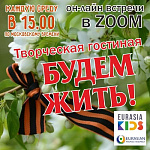 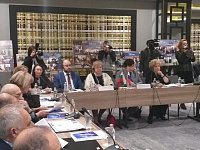