On September 17, within the framework of the MANE Lecture Hall project (MANE - Youth Assembly of the Peoples of Eurasia), a seminar was held on the topic “Migration processes in Eurasia”.

A lecture for young scientists from the countries of the continent was delivered by Victoria Ledeneva, Doctor of Sociology, Head of the Department of Ethnodemographic and Integration Processes of the Institute for Socio-Political Research of the Federal Research Sociological Center of the Russian Academy of Sciences (ISPI FNISC RAS), Advisor to the Head of the Federal Agency for Ethnic Affairs (FADN), member of the Commission on Migration Issues of the Council under the President of the Russian Federation for Interethnic Relations.

According to the speaker, today moving from one country to another is not uncommon, but migration itself is short-term or temporary. The main motive of a labor migrant is the desire to earn money and ensure well-being for himself and his family. This type of migration is voluntary, but one cannot but mention forced migration, often the only way out for refugees, victims of civil wars and residents of the least favorable territories affected by natural disasters.

Today, labor migration has become the engine of the economy of many developing countries, which are directly dependent on cash flows from fellow citizens working abroad. According to the International Organization for Migration, the share of international migrants is increasing every year. If in 2017 there were 258 million of them, today there are more than 272 million. Of these, 150 million are labor migrants. According to official statistics for 2019, 7 out of 10 countries with the largest number of labor migrants are located on the Eurasian continent: Germany, France, Great Britain, Spain, Saudi Arabia, the United Arab Emirates and Russia. 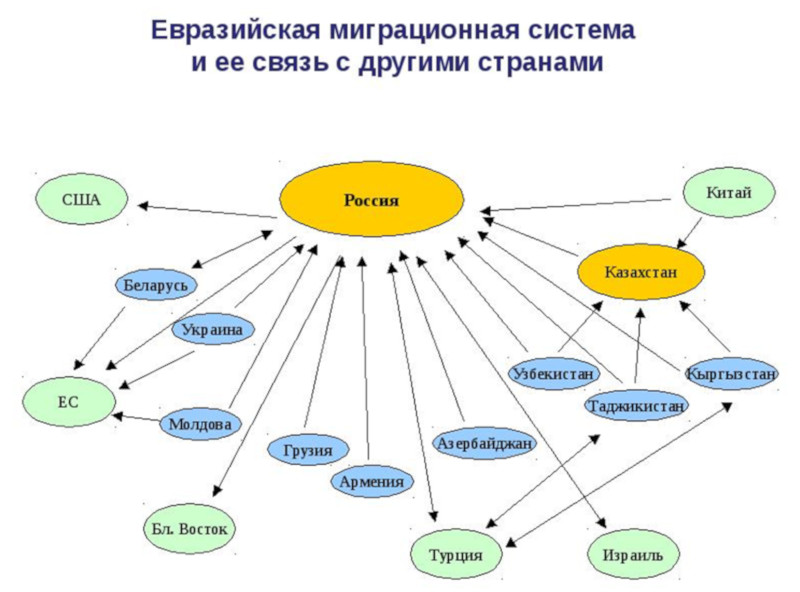 < p> It is Russia that is the central link of the Eurasian migration system, a group of countries of the post-Soviet space, which are interconnected by numerous migration flows, due to a number of historical, economic, socio-ethnic factors.

In addition to the former republics of the USSR, the Eurasian migration system also has links with such countries of the continent as China, Israel, Turkey, key actors in the Middle East and the European Union. Recently, educational migration has developed rapidly, the most popular among students from post-Soviet countries are the curricula of China, the EU, and the Persian Gulf countries.

“The common language of interethnic communication and the historically established close economic, cultural, political and, accordingly, migration ties increase opportunities for migration and positively affect the dynamics and intensity of migration exchange between the EAEU member countries,” Victoria is sure Ledeneva.

It is worth noting that labor migrants from the countries of the Eurasian Economic Union enjoy certain privileges. For example, in accordance with the agreement on the EAEU, documents on education are recognized without carrying out appropriate accreditation procedures, and social security is provided equal to that of citizens of the country of employment.

At the end of the lecture, the doctor of sociological sciences addressed students and graduate students, young scientists of Eurasia: “We need to study social processes that are constantly changing in our time. A year ago, we did not know that there would be a pandemic, quarantine, but today we assess migration flows in a completely different way, identify new problems, look for solutions, develop scenarios and forecasts. I urge young scientists to get actively involved in science and study migration processes. How we can further improve our lives, our society, depends on the youth. I wish you success, new knowledge and practical solutions!”

As the moderator of the online meeting, Co-Chair of the IAEA Coordinating Council Kristina Tatarnikova, noted, the Youth Assembly is ready to support young scientists of Eurasia: “We are always open to dialogue with young researchers, students and graduate students from Eurasian countries and are ready to support your undertakings on the way to great victories and scientific discoveries. MANE invites active young people, leaders of public organizations and volunteers to join its team.”

To become a part of the Youth Activist, please fill out questionnaire on the website of the Eurasian Peoples' Assembly.

The Eurasian Peoples' Assembly congratulates UNESCO on its 75th anniversary