In Ufa, in the Park. Yakutov, the official sign of the most eastern point of European cities according to the Guinness Book of Records has been established.

The sign was installed at the expense of extrabudgetary funds and by an institution headed by one of the members ">Public Council Representative offices of the Eurasian Peoples’ Assembly in the Republic of Bashkortostan Ruslana Kinzikeeva. A similar sign is located in the extreme western point of Europe, in Portugal, on Cape Roca, and is one of the most popular tourist places in the world.

The sign installed in Bashkortostan is made in the form of an earth sphere from two varieties of colored granite and Bashkir jasper, from which the outlines of the territory of the republic are made.

Thanks to the public initiative, this unique brand can become not only a tourist symbol, but also allow Bashkortostan to claim to host Eurasian border forums, as it personifies the unity of the peoples of Europe and Asia on territory of the republic.
Eurasian Peoples' Assembly representative offices of the Assembly Bashkiria Europe Asia tourism Eurasia sights
|
Facebook
|
Twitter
|
VKontakte
|
Odnoklassniki

The results of the round table with Vietnam summed up 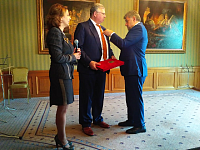 Andrey Belyaninov: "We must develop a strategy for preserving historical memory"